We have finally arrived at a time when we can better predict flows on California rivers for 2012.

It has been a crazy winter and a wild last four weeks, but it looks like we are about to land in a good place in regard to the rafting season.

The storms from late March and early April have made a big difference. I was skiing at Kirkwood on March 19 and the mountainous terrain reminded me of a worn out pair of Levi’s, the way the Sierra usually looks at the end of May in a normal year…thread barren snow with large chunks of earth showing through.

This past weekend I had the pleasure and joy of skiing at Kirkwood again, one month later with my brothers and nephews and it was a 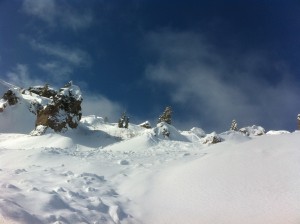 whole different place. It looked and felt like the middle of winter with deep, thick snow and only a few visible pieces of earth (see picture). These last eight storms brought nearly 20 feet of snow to the high Sierra! We are talking a new pair of Levi’s and enough clothing to get us through this season without showing too much skin.

In Northern California we are 101% of normal, which means any river in the upper part of the State will have a regular rafting season.

In Central California we are at 60% of normal which does not sound like a lot, but coupled with the surplus water from this past year (200+% of normal), we are in fairly good shape, especially on our dam-controlled rivers which will have full reservoirs and regular releases all summer long.

Southern California is another story. Most of the storms missed the lower part of the State, and left it at 40%. Our local hero in Southern California, the Kaweah River, does not have any reservoirs above the run and depends only on snowmelt. The low snowpack in that part of the State is not enough to produce sustainable flows after April, so we will not have a 2012 season there unless mega storms head south and pound the mountains there with another 3-6 feet of snow.

Dam-controlled rivers (South & Middle Fork of the American, Tuolumne) will run steady all season, but will not have high water flows in the spring time as they usually do. Cherry Creek season should start in early June.

See our flows page for the latest updates and details on all of our runs. Of course you can always call our office and talk to one of us about specifics for each river and the season.

You can also view our flow prediction chart for more details (click to enlarge): 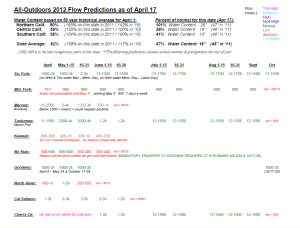 Hope this info is helpful. We look forward to seeing you on a California river trip this season!