Babies Everywhere! Newborns in the All Outdoors Community

Kids of former river guides lead fate-bound lives similar to those of royal children in Medieval Times- they have an arranged marriage to whitewater. (In my opinion a much better deal than forced marriage to a stranger who for all you know might have some disgusting habitual tendency to pick their nose or something like that.)

Anyway, with that in mind, All Outdoors has already set the roster for their Guide School in 2024. 8 new babies have been born in the river community this year, so we’re sure to have some very talented whitewater gurus ready to carry on the tradition!

And the proud parents are…

Stephanie and Dave Pope welcomed Owen into the world in August, giving their older son Wyatt some serious competition for cutest baby status. 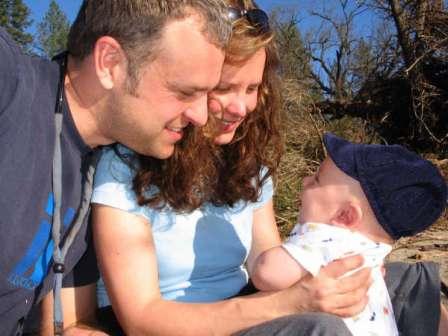 River Journey Stewart followed shortly thereafter in November, greeted by parents Amy and Sky. (If you can’t tell by the picture on the left, there is no shortage of love and adoration flowing towards this baby.)

And the latest addition to the All Outdoors family? Rowan Craig… DUNKLE!! Yep, that same guy yelling commands at you on the North Stanislaus and falling out in a Class II rapid became a father on December 10th. Yay Greg! To be fair, he only fell out once and it was likely because he was too busy smiling at his beautiful photographer wife, Saskia, to notice the rock coming up. (No Sas, he didn’t p

Although Greg did trick me into believing for a week that I was the first, rather than hundreth, person he called to announce the news; I still have to say that Rowan is an adorable kid. (Greg you still owe me one!)

Congratulations to all the proud parents. What an amazing community, family and life all those kids have been born into!