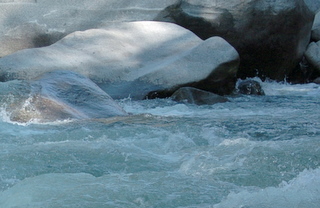 With the skies beginning to clear and California Wildfires hopefully begining to abate, it seems summer is finally unfolding as it should, with hot temperatures, cold water, and fierce rapids all there for the taking. The spring snowmelt is officially kaput, which has a major impact on whitewater rafting in California. For one thing, rivers dependant on snowmelt for raftable flows are no longer available. This includes rivers like the Kaweah and the Merced, whose seasons recently ended. Rivers that are dam-controlled are a different story. Upstream reservoirs mean these rivers have consistant and reliable water all summer long. Rivers in Northern California in this catagory are the South and Middle Forks of the American, the Tuolumne, and Cherry Creek.

The South Fork is very heavily damned, and regulated for both water use and for hydro-electric power. This class III river has reliable flows all the way into October. Flows will range from 1200 to 1700 cfs (cubic feet per second), the perfect range for the South Fork’s fun rapids.

The Middle Fork is also regulated by upstream reservoirs. It will have a respectable 900-1100 cfs for the rest of the summer. We’ll be able to raft the Middle Fork American into October this year.

The Tuolumne River is a protected Wild and Scenic river but is still heavily regulated. Hetch Hetchy reservoir is a major source of water for the urban areas of the Bay Area. The T’s class IV rapids will be raftable until Labor Day this year, with consistant flows of 1200-1800 cfs.

Cherry Creek’s flows will range from 1200-1700 all summer long so this incomparable and extremely challenging run will be raftable until September 1. The Cherry Creek season actually began a little early this year because Cherry reservoir had plenty of storage room and there wasn’t a massive snowpack.