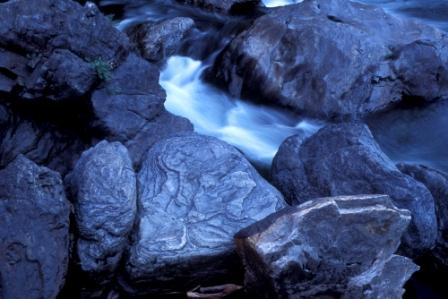 Although sometimes hard to find, there are a few places on the web for California boaters to go and share ideas, latest runs, flows, gear reviews, etc. One of those places is boof.com, whose boater’s forum actually gets posted on almost daily. Reading through threads from this last month, I happened upon one titled: “My Favorite Thing ‘Bout Boatin'”. One of boof’s members had the great idea of asking this question of fellow forum participants: What is your favorite thing about boating? He gave his own answer, and then other people responded with their perspectives. Although directed mainly at kayakers, most responses to his question are just as applicable for rafters, and a lot of them were touching and well-said.

So, I stuck by my belief that a good idea is wasted if you can’t steal it, and am now sharing my favorite responses from that thread with all of you. [I picked my own favorites and shortened a few of them, so if you would like to see the whole thing, go to: http://www.boof.com/forums/showthread.php?t=1318] Here they are:

â€œNo matter what else is happening in life, bills, job, personal strife, whatever; when you’re on the water, none of it matters other than you and the river and the crew your out with. I always feel like I’m away from it even if there is a highway right next to the run. I made a rule after I gave up commercial rafting that when I’m on the water, all I allow in my mind is what is happening then and there. It’s the thing I love most about boating.

At the risk of sounding clichÃ©, I love the sense of freedom. Itâ€™s you, the river, and your crew. Decisions are yours and yours alone. When your gut says go, itâ€™s time to go. When your gut says portage, itâ€™s time to start walking. There is no chair to dictate what can be ridden. No ski patrol to say something is unstable. At any given moment it is only you, the water, and your most recent decision.

For me, it’s being out in God’s Great Outdoor Cathedral.
Whether it’s moving or flat water actually.
I kinda agree with just about all the posts.
When your running a hard drop [not that I’ve ran that many hard drops in my 30+ years of paddling] your mind erases all outside and conflicting distractions. You become purely focused on the river and what’s ahead.
It’s worship.

I think that for me – boating strips away all of the unimportant BS that I carry around on a regular basis. Getting completely outside of any human system -communing with raw, powerful, uncut, elemental forces like WATER and ROCK â€¦- being left to rely 100% on your own intelligence, strength, and skill – well it’s just about the most liberating, beatiful thing that can happen to a person.
Rivers have transformed me fundamentally – balanced my life – given me a glimpse of the most vital aspects of living, and generally reinforced my belief that human nature ain’t all bad.
The guys I paddle with – well they are my best friends.
Gad damn I frikkin love rivers…

I really enjoy the people I meet on the water. I’ve been involved in many other sports and I’ve found that Kayakers are a special group. The nature of the sport makes us rely on each other to lead us down new rivers or rescue us from a bad swim. We’ve all been there and it makes for a special camaraderie.â€

And not to exempt myself from this process… my favorite thing about boating is:

The connections forged with the water, and with your companions who are on it with you. It is a nearly indescribable feeling, to be in that zone where things slow down and you finally find yourself in beat with the rhythm of the river, where you arenâ€™t struggling against a current but rather being faithfully led by just the right one. And then at the end of the rapid, there they are- the only other people in the world who understand what youâ€™re feeling, and who love it just as much- smiling at you and telling you to hurry up…thereâ€™s good Mexican food and cold drinks waiting in town.

Even more important, those companions would smile all the same had you flipped in that rapid. (Well maybe after picking up a few swimmers and helping you flip your boat back over.) As someone on the boof forum had mentioned, itâ€™s that real dependence on each other that makes the bond so special.

So anyway, thatâ€™s my attempt to put into words one of my favorite things in the world. Harder to do than one would think.

On that note, Iâ€™d love it if people commented on this blog with their own version or thoughts of their favorite thing about boating. Everyoneâ€™s got a different perspective to bring to the table, and I canâ€™t think of a better thing to talk about. Good work to whatever boof member first thought of this!