This was the last of our three days out North. [See Whitewater Rafting in January, Winter Rafting Attire, and Beautiful California.] Now one of my favorite runs, (See 5500 on the Cal Salmon) I can’t say enough about this river. Following are pictures of four of the bigger rapids of the day. 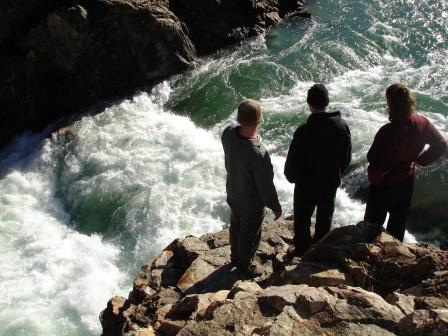 This is the first big one, and you reach it within five minutes of putting on the water! My first thoughts upon scouting this one? … “So, how hard is it to portage?” There are two huge reversals with a small line up against the left wall.

You can see the tongue on the left there, going right over that submerged rock. That’s the line we ended up taking. All went according to plan (although I can’t say we really knew what to expect in there) and was a great jolt to start out the day. 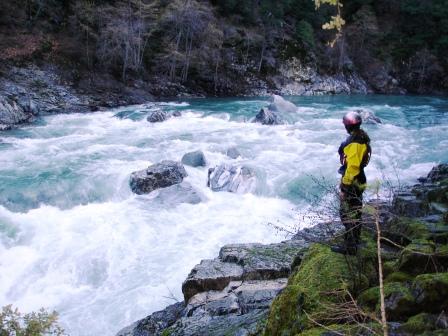 This is the rapid that had my heart beating hardest right before it because we scouted it just long enough for me to start imagining what could go wrong. We ended up entering to the left of those boulders in the middle of this shot. 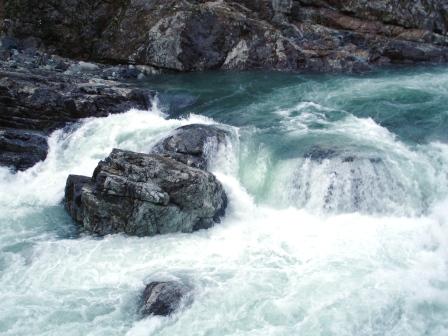 Rafts will sometimes take that left line against the wall. Looks like a fun drop! The kayak chose to boof off the middle pour-over– pretty impressive to watch. This picture was taken from about 20 yards away. The drop was actually about ten feet there. 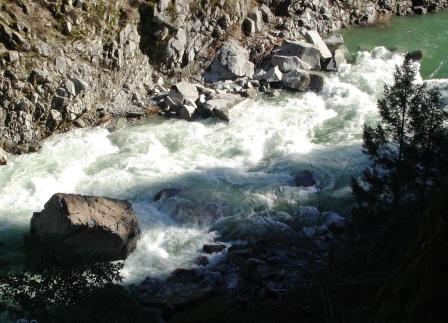 This is the rapid that leads into Freight Train, which is the rapid of this run… that one that taunts you in the back of your mind the whole day until you get through it. Not that Last Chance is a cake walk. Notice the three reversals you have to break through in order to get far enough to the right of that last one. Smokey commented that “the guarding features are enormous.” A little bit of perspective here: this picture was taken on the way to put-in, from a few hundred feet above the rapid. 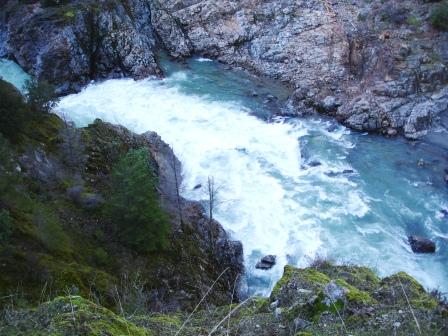 This is the only rapid above which Adam had anything to say to me. It was, “Here we go.” This was in the two seconds or so we had to get set up for it after Last Chance. This picture was also taken from a few hundred feet above the rapid. Anyone notice the amount of whitewater here??