The first half of the 2010 California rafting season has been remarkable for many reasons. For the first time in many years, early spring acted like winter. For eight consecutive weeks from April 1 to May 31, winter hung out in California. At a time when the sun usually begins to melt the white blanket of preserved water in the high Sierra, storm systems moved in one after another on a regular basis, and dumped rain and snow on top of what was already a good winter snowpack. By the time we turned our personal calendars from the month of May to June, we were still waiting for the sun to do its work on the cold Sierra! 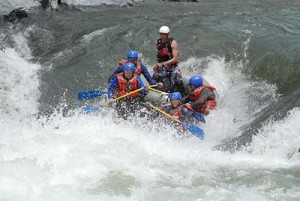 When the storm systems finally disappeared in early June, the sun was arking high and hot and the snow began to melt at a feverous pace. Rivers rose fast and stayed that way for the entire month. Water flows on rivers got to levels we have not seen in years, and we and our guests had a fantastic time riding the wave!

Here is a look back at rivers in June and a look forward to July through October:

The South Fork American, usually our easier Class III river, had flows as high at 7500 cubit feet per second (cfs). This popular river normally flows at 1500 in the summer, so these early season highwater trips for a delight! The rest of summer and fall will see 1500 to 2000 due to full reservoirs from winter (and spring!) snows.

The Middle Fork American, our most popular introductory trip to Intermediate Class IV whitewater, saw above normal flows up to 2000cfs since mid-May and is now down to slightly higher than normal flows 7 days a week and will stay there through mid-October.

The Merced, Yosemite’s Class IV river, had amazing flows the entire month of June. It reached 13000cfs on June 7! It stayed at levels far above normal through the entire month and only during the first week of July did we see flows that were more “normal”.  The Merced has no dams or reservoirs above the whitewater section so when the snow stops melting, the river stops running. Due to a significant amount of snow still remaining in the high Sierra, we expect the river to run through July and maybe into the first few days of August.

The Tuolumne River (Class IV+), also near Yosemite had some extreme flows in June ranging from 4000 to 10000cfs. This river becomes a run away locomotive above 8k and there were several trips at these impressive flows! By mid July the river will be down to more normal flows (1500-2k) and will run well until Tuesday, September 7 when it will shut down for annual upstream hydro project maintenance work.

The Kaweah also had its fair share of high flows. When the sun finally came to stay for a while in early June, this Class IV+ river rose to just above 5000cfs, a level we have not seen in several years! We had a great time at these challenging flows. The river has no reservoirs above the run and we expect the river to run through mid-July before it becomes to low for rafting.

The North Fork Stanislaus, a beautiful high elevation Class IV river in Calaveras Big Trees State Park, normally has a short season lasting from late April to late May. This year the snow of winter and spring provided great flows up to 2000cfs through June! By July 1 the river was not high enough to run. We will all have to wait until April, 2011 to return.

The North Fork of the American River usually has a short season due to the fact there are no upstream dams and reservoirs above the run. The snow in the high Sierra gave this river an additional four weeks of fun flows that finally ended on June 30.

For details on river flows and up-to-the-minute flows information for all of our runs, go to:
https://www.aorafting.com/river/flows.htm

If you have further questions, or need additional information, please feel free to call me or our office during our extended business hours.

See you on the river!