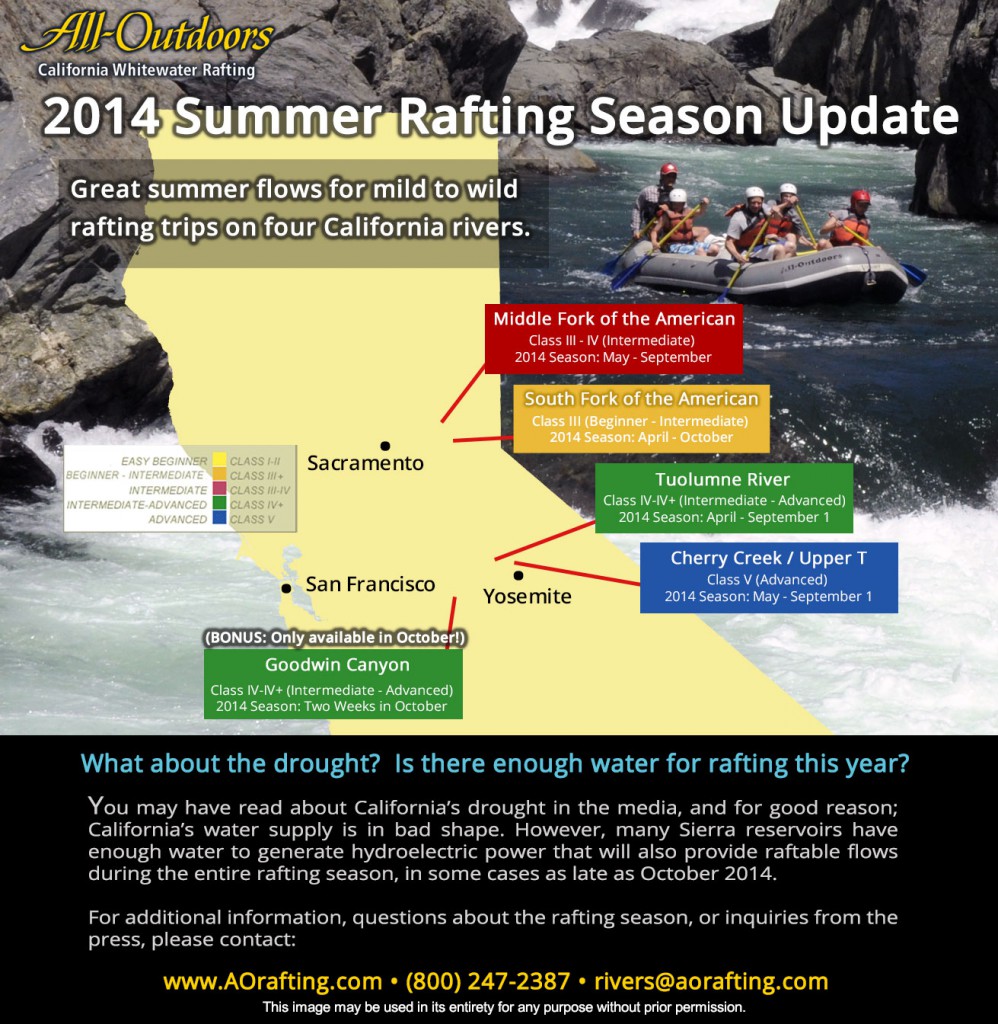 Here’s a more detailed description of each California river we’re rafting this summer:

Family-friendly and fabulous, the South Fork is your go-to river for groups with first-timers and Nervous Nellies, but it’s certainly no float trip.  Class III rapids abound and even experienced rafters will have a hoot on this, the most popular river in the state.  Trips are running now and into the fall!

Tunnel Chute rapid has to be one of the coolest rapids in California–it’s a heart-pounding ride down a chute literally carved out of solid rock that ends in a placid float through a small hill.  What???  Yes, it’s true, and you gotta see it to believe it.  Plus there’s another 17 miles of wilderness canyon with class III-IV rapids and calm stretches for day-dreaming and relaxing. Middle Fork river trips will run May-September.

Man, the Tuolumne is a keeper.  It’s a beautiful and wild canyon with a heart of gold that refused to be put out by the 2013 Rim Fire.  See the recovery process up-close and personal on a Tuolumne river trip this year–we’re already running trips and will be out there until September 1st, 2014.

Class V Cherry Creek is the most challenging commercial river trip in the United States.  And the drought is actually doing it a huge  favor–because there isn’t a big spring snowmelt, which has to subside before the river is low enough to run in typical seasons–Cherry Creek started much earlier this year and our season won’t end until September 1st.

*BONUS: Goodwin Canyon will be running in October!

The closest whitewater rafting trip to the San Francisco Bay Area, the Goodwin Canyon section of the Stanislaus River will be running for two weeks in October for a special release to coincide with the Salmon run.  Exact dates have note yet been announced for the releases, but we expect to find out sometime in July. (It isn’t expected to run this summer, and space is limited on these exclusive dates, so if you’ve been meaning to check this river off of your bucket list, be sure to reserve your spot in advance!)