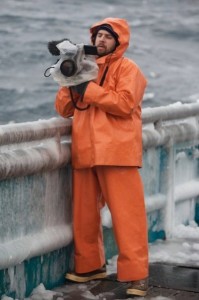 Kayaking California’s Class V rivers would be the ultimate adrenaline rush for most people. For kayaker and All-Outdoors videographer, Ben Zupo, the Class V rapids in the Sierra Nevada are simply the perfect training ground for the “second most deadliest job in the world,” working as camera crew on the hit TV show, The Deadliest Catch. Ben reports that life on the Alaskan fishing boat, the Cornelia Marie, as much of an adrenaline rush as kayaking on the creeks that flow out of the Sierra Nevada. In the past year, Ben’s career has taken off tadalafil from india. This summer he found himself starring in front of the camera for the Deadliest Catch: Behind the Scenes Special (Season 4).

And why is this important to All-Outdoors? Our current claim to fame is that we knew Ben was a catch (no pun intended) long before the Discovery Channel “discovered” him. Knowing that he was both an amazing kayaker and an experienced filmmaker, we hired Ben Zupo to kayak along with several of our trips in the spring of 2007 and put together videos that would give viewers a better idea of what each river is like. And while we will never reach the same number of viewers as The Deadliest Catch, the videos are definitely proving to be a smashing success.