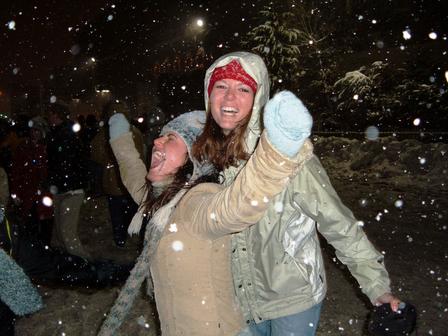 We’ve had a few weeks to recover from those tropical storms that hit us at the beginning of January, but winter is still dumping down the occassional bouts of snow higher up in the Sierras. This time its thankfully a bit colder up there. Despite the dry spell early Winter and the warm storms that melted a lot of the snow, we’re still seeing normal water content for the state.

California’s Department of Water Resources just released their February 1st snow survey for Northern California, reporting numbers that are between 90 and 103% of the long-term average. (The overall state average content was actually a bit higher at 121%)

Although closer to Spring run-off then we were a month ago, (See “January Snow Survey and Spring Rafting“) we still can’t really use these numbers to predict what our rivers will look like come April and May.

What we do know, however, is that both a really saturated ground from last year’s wet winter and the fact that we’ve got an average base layer right now both work in our favor. It’s likely that we will have at least average flows in Spring, and if we have a very cold and wet February and March we may even luck out with another year of higher water!