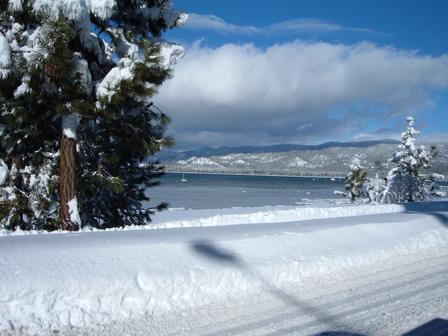 As February edges on towards March, Spring Rafting becomes less of a fantasy and closer to a reality. While our feet are still firmly locked into ski boots and planted in the snow, our minds have started to wander to those valleys down below the ski resort: the beautiful river canyons into which that snow will eventually melt. And so we begin our pre-season rituals… pulling out some of that old gear, going online to river supply sites and contemplating what other goretex, rope, or metal contraptions we definitely need to order this year, reading our favorite rafting stories, and of course: religiously checking the snowpack and flow predictions…

This winter has been an especially interesting one in terms of snowpack, taking us all on quite the rollercoaster ride. There were the first few months of dry weather, followed suddenly by a torrent of December storms that flooded some of our highways and towns and left California’s reservoirs at or near capacity by January. In the last month we’ve had smaller versions of the same teeter-totter: a few dry weeks, big storm, a few dry weeks, big storm.

So what can we make of all this crazy weather, and what does it mean for our rivers come spring time? This is the big question on everyone’s minds, and will be asked continuously for the next month leading up to April and May. Although often answered in the form of a simple percentage [see ‘February Snowpack Bodes Well for the 2006 Rafting Season‘], the question is actually a more complicated one than most people think.

Does this mean that you should cease your weekly religious-like checks on snowpack and give up that exciting sense of anticipation they give? No way– that part is too much fun. It is helpful, though, to become familiar with some basic concepts and terms before drawing any conclusions.

Instead of just directing you to the latests reported numbers, then, I’ll first give a little bit of background information on how these flow predictions really work.

1. Snow and Rain: This one is pretty easy to understand, and is a very tangible variable for everyone to observe and keep track of. For those of us living in lower elevations, a winter storm is associated with rain, whereas folks higher up in the mountains will usually experience snow.

As owner Gregg Armstrong explained in an All Outdoors article last winter, “Whitewater rivers in California are located in the foothills of high mountain ranges. These ranges above the rivers ‘catch’ snow in the wintertime. Unlike the rain, snow ‘hangs around’ for months and melts later on in the year when California enters its annual dry period. This ‘delayed’ melt feeds California when it is needed most and is the main source of water for our rivers, lakes and reservoirs. The snowpack in the high country acts like a ‘bank’ of water that receives deposits all winter long. In the hot spring and early summer months, lower elevations take withdrawals from this amazing water source.”

The catch with this one is that warmer winter storms will sometimes cause it to rain in higher elevations instead of snow, which will melt some of the snow from previous storms and cause premature winter run-off into our rivers and streams. (This is what we experienced with all those floods at the end of December and beginning of January.) Warm storms can thus sometimes result in less snow in the mountains come springtime.

So how is it that one mountain slope will contain snow with a lower water content than antoher? Again, I refer to the explanation given last year by Gregg Armstrong: “This can occur when storms are cold and leave a very dry snow in the mountains. If temperatures between storms remain near freezing and surface snow does not melt and soak into snow below, the pack will remain light and have a low water content. When a dry snowpack like this melts it may produce less water than a smaller-sized snowpack with heavy wet snow and significant water content.”

3. Ground Saturation: Although a much smaller player in the big picture, ground saturation can still amount to a 4 to 15 percent change in predicted flows. Ground saturation refers to how much water has already been soaked into the ground. More water equals higher saturation, and higher saturation in turn means more snow that remains above ground, eventually turning into snowmelt and water in our rivers.

This is one of the reasons that last year’s weather and snowpack actually plays a role in this year’s predictions. Because last year was so wet, and a lot of the snow in higher elevations didn’t melt until August, we started out this winter with an already well-saturated ground. The ground thus soaks up less of the snow that falls during current storms, and we are left with more water come springtime!

4. Weather in Upcoming Months: To state the obvious: warm weather melts snow. (I don’t mean to insult anyone’s intelligence here.) So, the weather from now through to Spring is incredibly important in determining flows. We can have incredibly large storms, but then two weeks of hot weather can melt it all at once. Conversely, there could be relatively small storms in the next few months accompanied by lots of cold days in between, leaving a decent snowpack in Spring. Colder weather means more snow built up and packed down, resulting in more water for us to enjoy.

5. Reservoirs: Reservoirs play a very important role in determining summer flows for all of California’s dam-controlled rivers. Included in this category are the South and Middle Forks of the American River, the Tuolumne River, and the North Stanislaus. For these rivers, those warm storms we got in December and January may actually have been helpful.

California’s reservoirs need to strike a balance by Fall in which they are low enough to absorb any large winter storms, but high enough to survive a drought should one occur in the next year. This means that when they are full in Spring, they have to empty out all that excess water by Fall so as to leave room for next winter’s storms. Full reservoirs thus translate into good, consitent flows throughout the summer on dam-controlled rivers.

5. Using These Factors To Make Predictions: Alright… so you know who the role-players are. Now what do we do with these five different pieces of information? (Snowpack, water content, ground saturation, weather and reservoir levels.)

There are two steps in the prediction process, and then a few things to keep in mind about the accuracy of these predictions.

The first step is to determine the current water content for California’s snowpack as of the latest surveys taken. This will depend on ground saturation, the amount of snow, and finally on how much water is contained within that snow. The second step is to take that current number, and then add it to historical long-term average water content numbers for March and April (usually averaged over the last 50 years). This sum is then used as the closest predicted estimate of future flows. Finally, this prediction is usually reported as a percentage of the total long term average. For instance, the American River is currently predicted to have flows at 111% of its long-term average.

Now for the accuracy of these predictions. Obviously they are heavily dependent on average weather patterns and numbers from past years. We do not yet actually know what March and April will look like, and thus have to take a best guess at how much more snow will build up from now through Spring. Predictions will get more and more accurate as we get closer to May, and are using real numbers rather than historical data. Also, you’ll notice that reservoirs are not taken into account, meaning that flow predictions for dam-controlled rivers do not necessarily predict summer-long conditions.

With all of that in mind, however, predictions can still prove very useful and are generally helpful in giving us a better idea of what different weather patterns over the next few months will mean for California’s rivers. For example, the fact that we’ve got such a heavily-saturated ground and relatively full reservoirs makes us less dependent on heavy storms in March. Also, weather patterns often do fall close to their averages, in which case the predictions can be very close to accurate.

Predictions For the 2006 Season:

So now that you’ve been armed with a much better understanding of where all these numbers come from, you probably want to know what the current numbers and predictions actually are.

OK OK, I’ll get on with it. Instead of trying to reproduce all the graphs here, however, I direct you to the All Outdoors Flows Page. You’ll find a general overview of California’s current water content state-wide, as well as river-by-river flow predictions. The numbers there were updated as of this morning (February 22, 2006), so should give you some of the most accurate projections available.

Each time the California Department of Water Resources releases their latest survey, I’ll make sure and post an update here with new predictions. Hopefully now these predictions will be easy to understand, and we can all hope for wet snow and cold weather in the coming months!