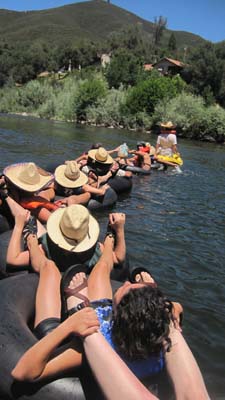 Have you ever thought to yourself, self, I just want to send out invitations to all my friends, invite them to the river for the weekend, ask them to create a bathing suit without using a sewing machine and then wear said bathing suits while tubing down the South Fork of the American River?  Well, that’s exactly what we did over the 4th of July weekend and while playing dress up at the river is not necessarily an original idea, (I’ve been told wacky outfits have been making their way to the river for years in the valley) it was still an awful good time down by the river. Lots of pictures were taken, music was played, laughter abounded and stories will live on in infamy.

Here’s a few shots from the weekend (carefully chosen to protect those involved in the festivities). Maybe we’ll see you out there next year because honestly…nothing beats a party barge.