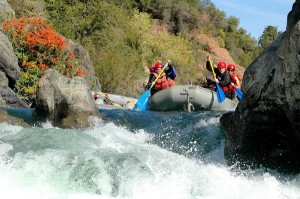 Disaster.
We’re no strangers—landslides, rockslides, sliding fortunes in the global economy, apocalyptic fires, ripped boats, broken oars, oil leaks, soggy bread and sunburns… bring it on, ’cause we can deal. But a government shut-down? Color us powerless. And so, it is with sadness that we have had to cancel our sold-out first weekend on Goodwin Canyon. *tear*

The good news? 1200 CFS and Double Runs. And BBQ.
If those boys up on the hill will just get their acts together and do their job (Who me? Editorialize? Don’t even get me started!) next weekend on Goodwin will be a go! And what a go it will be because we’ve been told to expect awesome flows of around 1200 CFS! And, we got permission from our Fearless Leader to do the double runs and BBQ of Goodwin Canyon Days that we had originally planned for opening weekend.

October 26-27 Goodwin Canyon Days are on! (Fingers Crossed)
So if you can handle a little uncertainty and need another reason to root for a re-open of our fair government (as if), give us a call and jump on this opportunity. Because come November, regardless of what’s going on in Washington D.C, the all too short season on Goodwin will be over.