There are all sorts of happenings going on right now at the All Outdoors Property on the South Fork of the American… a new parking lot, check-in center, strawbale construction…(To read the post I wrote describing these developments in more detail, go to: Alternative and Recycled Building Efforts On the All Outdoors Property.) As stated in that earlier post, one of the main goals of this project is to showcase alternative and conservation-driven construction and landscaping. As a part of fulfilling this goal, owner Scott Armstrong organized several outings to old barns scheduled for demolition, and salvaged whatever wood and material he could to be used on the All Outdoors property. This may sound like a fairly simple endeavor, but it can actually be a grueling, long, and sometimes humorous, day. (All worth it of course!) Following is an account of one of those “epic” barn missions…

It was early morning, and a mist still hung over the land. A few of the most dedicated and strongest of All Outdoors guides huddled in a circle around their fearless leader, Scott Armstrong. And he said: “You’re mission, should you choose to accept it, is to go forth into the morning, find an old, seemingly un-savable barn, and save its wood from imminent destruction. Should you fail, the barn will fall tomorrow morning to the bulldozers, its wood never to be used again.” And so, they loaded into big, rumbling trucks and set off to find the old barn and bring back its wood to be made new again and used as part of the All Outdoors parking lot and greeting center on the South Fork of the American River. This, is their story… 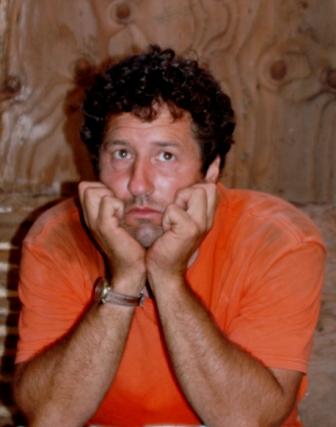 Scott is told by his family friends at Heim Bros that the barn’s demolition will occur earlier than previously scheduled. (Translation?- The very next morning!) Where Scott thought he and his team would have a few days to save the barn, they only had 24 hours. In the above picture, Scott ponders this predicament, and wonders if they will make it in time… 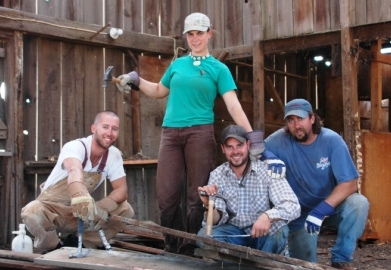 8 am: The Guides Step Up to The Plate

Despite their new time crunch, Scott, Hunter, Naomi, Matt, Kyle and Ben decide to go ahead and attempt their mission. The game plan? To tear down as much as they could by nightfall, and then load up the trucks by moonlight. 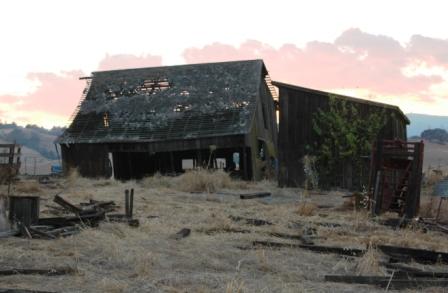 Something worth saving. Don’t judge a book by its cover here, folks! There was some beautiful old growth wood left in this here barn, as proven by the beautiful strawbale structure now sitting on AO’s property. 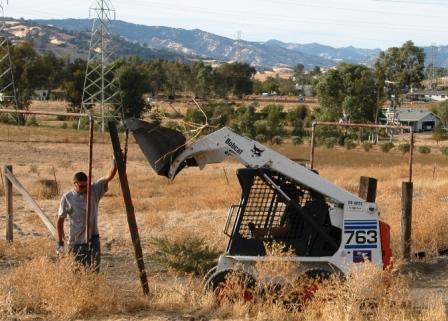 Ben and Hunter learn that tearing fence posts out of the ground is fine and dandy until you tear one out of a yellow jacket nest. Hunter runs into the barn white as a ghost and with five new battle wounds (stings).

Throughout the day, a joke develops between Scott and the guides that he is giving them an “all expenses paid” vacation… free food all day long (courtesy of George and Delores Armstrong and the local all you can eat Chinese food restaurant), and of course- top-notch amenities. 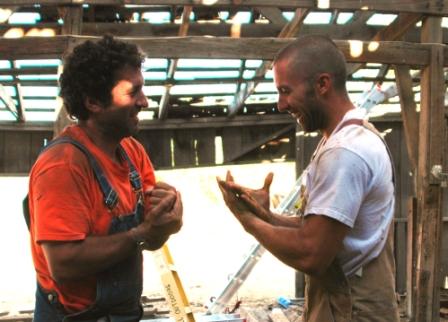 Scott and Kyle ro-cham-beaux for dibs on who gets to be first in line for those beautiful amenities. Kyle pulls through with a surprising paper win over Scott’s rock in the last round.

Naomi isn’t afraid of tools and rusty nails. She pulls boards apart at a breakneck pace, weakening the barn’s foundations and bringing it closer to toppling with every minute.
Meanwhile,… a few feet above her… 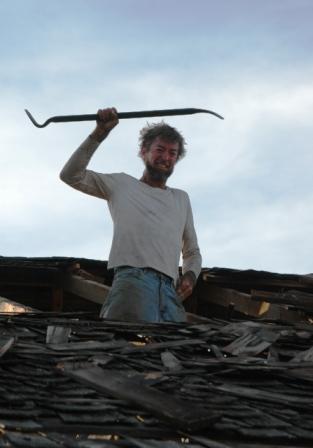 (Cue the Planet of the Apes Theme Song.) While Naomi shows speed and ability down below, Mike displays incredible courage and skill up in the rafters, showing no fear in the face of an increasingly unstable workplace, and even letting out a yeehaw when one of the beams he is sitting on falls a few feet. His advice? “You have to just ride it out!” 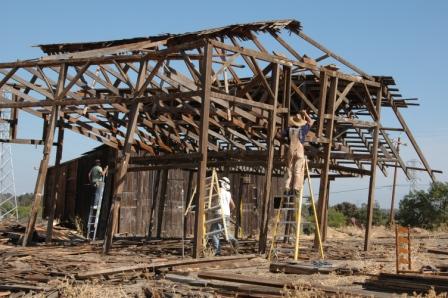 Now All We Have To Do…

This is a picture of the barn in its final stages before falling to the ground. At that point in time, all the guides took a break for dinner, and then began the long night of loading and moving all that wood they had disassembled.

Although it took them until 2 am, Scott and his team of determined guides completed their task. All salvagable beams were loaded into trucks and brought back to Coloma. The wood was then used as the framing and roof of the new strawbale structure on AO’s property, as well as in the benches to be used for seating during pre-river talks and weekly plays. (Just kidding about that last one.)