For anyone who loves rafting this is a valid question- hell being equivalent to zero water and high water being, well, high water. So, as winter finally begins in earnest here in California, we wait and pray for the same type of winter we had last season. 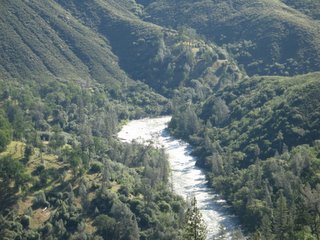 Although storms raged all winter long last year, it was in February that we first began to understand what we were in for. Every time I drove east on Hwy 50 I saw the Sierras completely covered white with snow, and reports were coming in of 150% snowpack in Yosemite, 175% further South in Sequoia National Park. No matter how hot it might get in March or April-

We were going to have a high water year.

Magic words to river-runners everywhere, “high water years” are elusive seasons from which older guides get all their best river tales. They are times of â€œSo there I wasâ€¦â€ and â€œYou wonâ€™t believe itâ€ stories; of bigger-than-life heroes and fools. Of course my friends and I all wanted to have some high water stories of our own.

California was long overdue for one of those years, and us younger guides who had heard about them but never been there could barely contain our excitement. At night our dreams were consumed by wet ropes, grey hypalon, and whitewater. And then all of a sudden spring had arrived. By April we were looking at flows five to ten times what we were used to on almost every river All-Outdoors runs.

Now, six months later, I’ve finally got some bona fide high water tales of my very own- albeit not quite as heroic as I originally imagined. They’re made up of an amazing cast of characters, take place in some of California’s most beautiful canyons, and if nothing else will keep you entertained for a few minutes. (I’m also proud to report that I play a role in some of the more, uh, humorous scenes).

I’ll post a new one each week to remind us all to look toward the mountains every once in a while and do whatever rain dance it is your god/s prefer. (Of course performing the modifications needed to convey that what you really want is lots and lots of SNOW).

Keep an eye out for links to stories titled “Spring 2005.”