Water flows have settled down quite a bit compared with previous weeks. Most rivers are approaching what we think of as normal summer flows. One exception is the Tuolumne. It is still showing signs of a heavy winter and is still flowing between 3000 and 4000 CFS which is what it normally does in late June and early July. 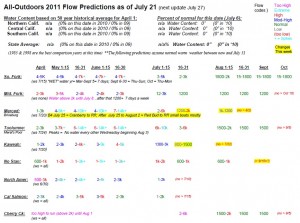 The other big exception is the North Fork of the Stanislaus. This exciting Class IV+ run starts at 4500 feet near Calaveras Big Trees State Park and has beautiful mountain scenery. It normally has a very short season, from late April to late May. This year it will be running well through mid-September and maybe into October!

Free flowing rivers with no dams above the run have either finished for the season or are getting close to doing so. The North Fork American which usually runs only in April and May lasted until early July. The Merced is entering its final two weeks and our final trip is scheduled for August 2.

The South Fork of the American is finally down to more normal flows. I was there on Tuesday on a 1-Day Lower Gorge trip and it reminded me more of summer releases than spring high water. The Middle Fork has settled into its 2011 pattern: 1200 CFS 7 days a week, and will continue through early October. Cherry Creek, one of the most challenging rafting trips in the U.S., is still too high to run. By August 1 we believe it will be at appropriate flows and trips will become available.

By the first week of August, the remaining dam-controlled rivers will be locked into regular releases and will not fluctuate significantly. It is has been a rapid-filled year so far and the rest of the season will remain healthy and consistent thanks to a very generous winter.