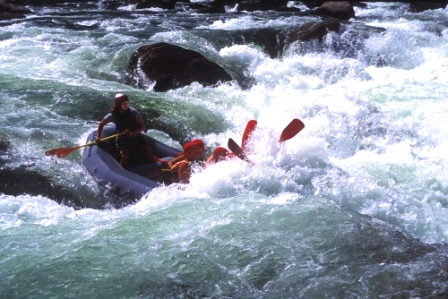 March has done exactly what we all hoped it would- consistent storms and cold weather in the Sierras. For me personally, all this wet weather has resulted in a new addiction to California’s Department of Water Resources website. I am ashamed to admit that I am on there at least three times a day, as if the snowpack will have changed significantly in a few hours! (I’m not even sure they take measurements more than once a day.)

Right now, I’d be happy if those numbers stayed right where they are– things are looking great for Spring!

But those aren’t even the best numbers… The grand prize winner of all these high water content reports is the Cal Salmon, which is currently sitting beneath an incredibly high, 175% of its April 1st average, snowpack… just waiting to melt down those mountains and give all us rafters an incredible Spring out there. Having just recently experienced a high water day on the Salmon at 5500 cfs, I can’t tell you how excited I am about this. [Click here to read about our trip out to the Salmon in February.] Whether you’ve seen this run yet or not, this will be one of the best years to get out there. The drive is more than worth it!

As for some of the other rivers in California, the Tuolumne and Merced are at about 110% of average, the North Stanislaus at 105%, and the Kaweah at 105%. (Although a more recent snow storm in the Southern Sierras probably kicked up that number for the Kaweah quite a bit.) Keep your eyes open for that final flow report in early April. I’ll post on it as soon as it’s out.