Mavericks Surfing- Is There A Whitewater Rafting Equivalent?

Unbelievable power and beauty… surfers face a 40 foot drop after paddling over the lip of this wave, dubbed the most inticing and dangerous of big wave rides.

A River To Challenge It?

I first thought of this possibility while reading about what makes Mavericks so unique. (For those who have not yet heard of Mavericks, it is one of the worlds biggest waves, appearing only for short intervals of time off the Northern California coast near Half Moon Bay.)

During a period of three months in late winter, the world’s top big wave surfers are essentially on call. When they get the news that the wave is going, they have 24 hours to arrive in Half Moon Bay for the annual competition. (For more information and coverage on the event, see Mavericks: The Wave Beyond.)

It seems then, that Mavericks distinguishes itself in three ways:

As a private boater (when not guiding), this was all starting to sound vaguely familiar. I couldn’t help but think of the numerous times I’ve heard friends of mine having conversations about the latest flows or spill-over being reported for some rarely-seen river, hoping that it will become either high or low enough to run in the next few days and referring to past runs as “epic.”

The question, then, is not whether a Mavericks river exists, but rather which run deserves the title.

To answer this question, I did copious amounts of research (read a few online boater forums and outside magazine articles) and conducted an informal survey (called a few friends up and asked their opinion). After some critical thought, I decided to break things down into three categories:

Why? Well, the California deal is just to stay local and because most of us can’t afford to go off to different countries all the time. And you know, Cali pride. I split the results up into Creek and River categories because as much as I love them, rafts are a little too big for some of the more “sick” creeks that those crazy kayakers “bomb” down, but one of those creeks parallels Mavericks so well that I would have felt a bad journalist (self-appointed) had I failed to mention it.

OK so finally on to my conclusions:

Who knew that there was even more whitewater up there? Above the Cherry Creek run many of us have rafted in to the Main Tuolumne, there exists yet another set of beautiful and extremely challenging Class V+ rapids. Just like Mavericks, there is a short time period in which kayakers can run this creek. Hopeful boaters must be on-call during its season (late summer) waiting for the perfect water level, which will often only last a few days. Levels are dependent on snowmelt and are often too high except for a few short days at a time when the temperature drops. Once predictions for low enough flows are made, kayakers begin their 10.5 mile hike in to put in. 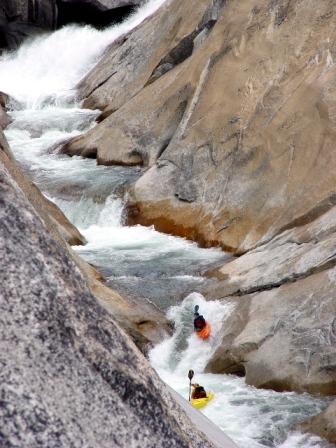 In terms of the skill set required to run these rapids, the number of kayakers capable of it is low. Entrance is limited to veteran boaters with both a lot of Class V and creeking experience. At the heart of the run is a section called “Cherry Bomb Gorge. A kayaker’s decision to enter and run this canyon is similar to a surfer’s decision to paddle onto the face of a wave: totally committing. The walls are vertical, giving no option but to paddle the whole way through (or swim if you’re less fortunate.) Drops are as high as 30 feet in some places, and rapids are almost continuous Class V+.
As if there weren’t already enough parallels to Mavericks, Upper Cherry Creek has been getting more and more press lately in the boating community. The amount of video and boats up there this last year has actually sparked debate about the value of solitude in such a run.

For more information/articles about Upper Cherry Creek, follow any of the below links:
http://www.justfluid.com/
http://www.boof.com/forums/viewtopic.php?t=2046
The Seven Rivers Expedition Blog

The Mavericks of California Rivers: The Rubicon

One for us rafting fools! This run has been described on the California Creeks website as having “more exhilarating whitewater per kilometer than perhaps any

other stream in California.” So the exhileration factor is already spelled out for us, putting the Rubicon in good contention for Mavericks standing. But as is so eloquently explained above, there are a few more standards that must be met.

First, there is the question of timing. Is the Rubicon as last-minute and unpredicatable as Mavericks? To answer this I just refer to a post on the notes page at Dreamflows (a flow-reporting website):

Hell Hole Reservoir on the Rubicon is close to spilling. The reservoir storage is 205,240 AF, rising slowly, while the maximum capacity of the reservoir is 207,600 AF. In other words, if/when the reservoir storage reaches 207,600 AF, Hell Hole will spill and the Rubicon will have more water in it. How much more water depends, naturally, on the extent of the spill. Dreamflows projects the storage change trend three days into the future, trying to predict whether Hell Hole will spill, and currently doesn’t think it will. Ralston Powerhouse folks are doing everything they can to stop spill, and they don’t think it will spill, but they don’t have enough data to know for sure one way or the other. So, it seems spill is possible but unlikely, but if it does occur it’ll be in several days’ time and probably won’t last long.

Anyone follow all of that? (It’s especially fun to read really fast.) Anyway point being that the flow window can be very small. A few people attempt a run in early season on regular years when there is enough snowmelt in the channel, but this is a challenging feat because the roads to put-in are still snowed in. Most people therefore wait until a high water year (last year was the first in seven years!) and then are dependent on those pesky spillover flows that the above Dreamflows excerpt is rambling on about. So to make a long story short, the Rubicon may even be more of a timing monster than Mavericks!

So what else? We still have to compare the Rubicon’s skill-requirements for a relatively safe and enjoyable time. In terms of classification, the Rubicon is described as Class V- below 1000 cfs and solid V up until 2000 cfs, after which it becomes unrunnable. Although not as committing of a gorge as Upper Cherry Creek, a Class five rating definitely trims down the number of people capable of guiding it.

One International River To Rule Them All: The Tsangpo Gorge in Tibet

There have been several books written about this place, and quite a bit of controversy surrounding one of the expeditions that attempted to run the river. Unlike Mavericks, this river has never been “conquered” in its entirety. (I hate to use that word.) Only sections of it have been successfully completed, and several lives have been lost in the numerous journeys into the canyon.

Just as Mavericks is for many surfers much more than just a wave, The Tsangpo is to boaters much more than just a river. There is a large element of the spiritual and mythical surrounding the place. This is due in part to the fact that the Tsango gathers its water and power from the heights of the Himilayas and forges a canyon “three times deeper and eight times steeper than the Grand Canyon.” –NPR The rivers origins and grandeur give the Tsangpo an almost untouchable and immortal character, and the gorge is actually considered sacred to Budhists. Adding to this are speculations that Shangri-La can be found in the depths of the lower gorge. 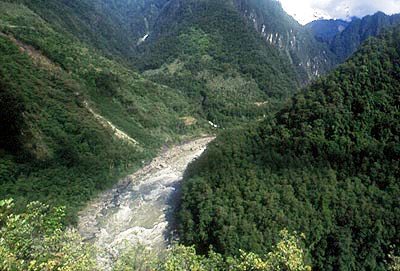 Timing on this river is incredibly important, as it is only runnable in its lowest stages, and then only by a very select group of talented and wise boaters. Only one kayaking expedition was able to get as far as the confluence with the Po Tsangpo, and an earlier expedition that attempted the gorge in flood stage lost a member to the river.

But they are missing something important.

The thing that most ties the Tsangpo to Mavericks, and even the Rubicon and Upper Cherry Creek in a smaller way, is not found on the list of standards I’ve been using throughout this article. It is instead in the awe and respect these waters engender in all who hear of or see their incredible force and beauty. It is the fact that part of what makes these places so beautiful is that they are, to most, untouchable; that nature has reserved some of her more wonderful moments and places for those who best understand her.

I’m not near the level of boater to run any of the rivers I’ve talked about here, but I know why it is that these surfers and kayakers are drawn to what they do. It is in those moments when you can stop trying… those moments when you’re so completely a part of the water that everything just flows, and you then have the time to look around you and realize where you are… Shangri-La or no, it is always worth it.