With the weather starting to warm up and spring fever setting in, the question on our mind is what’s in store for whitewater rafters this year. After compiling data from the Department of Water Resources, and comparing it to information from other seasons, it adds up to good flows across the state for the 2008 California whitewater rafting season. 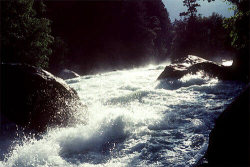 The Big Picture: This was a generous winter in California. By the time March arrived, snowpack in the Sierra was 135-145% of normal! As always, conditions in California can change quickly. By the time April came, we were down to about 100% of normal, due to a dry final month of winter. We are glad the state was ahead of the game in regard to snowpack, and could “absorb” this late, short dry spell.

Watershed, Rivers, and Run Off: Each watershed is different, so when it comes to predicting how rivers will flow, you must look at individual drainages and determine how snow (future water) will affect the rivers once it begins to melt. You also need to know if the river is “free flowing” (no dams and man-made lakes above the whitewater run). These unobstructed rivers run well when snow is melting, but because they have no upstream water storage, they do not have adequate flows for rafting later in the season. By contrast, “dam-controlled” rivers store water in upstream reservoirs and release it gradually all season long creating wonderful (and exciting!) flows for rafting through the summer months and into fall.

Run off is the key to river flows. What comes down the mountains and ends up in the river is what makes rafting happen. The Dept. of Water Resources is now giving “run off” measurements rather than just “water content” data because at the end of the day what we’re all interested in is how much water winds up in rivers—not just how much was above the river before the spring melt begins. The helpful folks in Sacramento take ground soakage, evaporation, and other important elements into consideration when determining run off. We are excited about this calculation because with this information we can make more accurate predictions about what your river trip will be like in 2008!

Forecasted Run Off – specific rivers: to occur between April 1 and July 31 for individual drainages (compared to 50 year average):

What this means for rafters: California rivers in 2008 will have “normal” flows…something that actually does not happen very often. This is good news for the whitewater rafters and the state as a whole. It means rivers will flow high but not too high. It also means that rivers will have full complete seasons and will not be cut short by the lack of snow melt coming out of the higher elevations.

Free flowing, non-dam controlled rivers will run well April through June and even into early July depending on which river you have in mind and what weather is like between now and the end of spring. Dam-controlled rivers will have high flows in the spring time when snow melt is peaking (May through mid-June) and consistent flows during the summer and fall months because reservoirs will capture most of the spring run off and release it on a regular basis.

Get ready for a good year because we have been handed a healthy snow pack for the 2008 season!

For detailed flow predictions for each of our 10 California rivers, please go to the Real-Time Flows Page.

Of course you can always call us during normal business hours and we can talk about this season and help answer any questions you might have about water flows.