Our Official Flow Predictions for California Rivers in 2010

Weather and its impact on the rafting season:

Every year is an adventure in California when it comes to weather and water. When the amount of annual precipitation for the State averages just 30 inches, you are never far from an extreme low or an extreme high. In a wet state like Florida, some areas get as much as 100 inches a year! In a place like that there is room to decrease without much impact. California water situation is a bit more tenuous. If a few large storm systems head north into Oregon and bypass our state, we could miss as much as 10 inches of precipitation. That could put us into drought conditions. If one or two such systems head our way we have an above average year for water!

So how much did we get in California in 2010? Lots! And it is still coming!

It stared with a bang in October. We received 4-6 inches of rain in a 7-hour period early that month and it saturated the valleys and foothills and left a significant blanket of snow across the Sierra. The rest of fall saw regular amounts of precipitation. In mid-January a large storm system came in and dumped rain and snow for the rest of the month leaving us far above normal for most of the state particularly near our northern and southern borders. The rest of winter delivered storms on a regular basis and by the time we got to the end of March we were healthy…and then spring happened.

What a spring it has been so far! April, 2010 has been very wet. During this month we are normally putting our coats and skis away for the season. This year we have spent many days doing just the opposite. This is very good news. As I have said in previous years, the months of spring are critical to the California rafting season. If April, May and early June are warm and dry we can lose a good portion of our winter snow and rivers can run too high too early. If these months are cold and wet, snow is preserved and increased so that when it warms up during the main part of the rafting season we get it all! With only a four days left in April and cooler, wet weather predicted, April is an “all” month and then some. 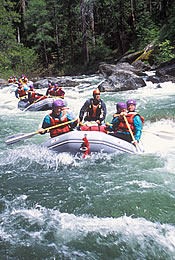 Here are the hard (and wet) facts:

Water Content(amount of water waiting to be released from snow when it melts):

If you are interested, you may want to click on the link below. It leads you to a graph of water content in California as it develops during the winter. It comes from the California Department of Water Resources in Sacramento and is a helpful tool for determining future flows and the length of rafting seasons on rivers. We refer to it often.
http://cdec.water.ca.gov/cgi-progs/snow/PLOT_SWC

What does all this mean for specific rivers in California in 2010?

North Fork American River (Class IV+):
Med-high flows between now and mid-May. Lower flows between mid-May and early June. Flows too low for rafting after the first week of June (no reservoirs above this run).

Tuolumne River (Class IV+):
Med-high flows between now and mid-May. High flows from mid-May to late June. Med to regular flows between July 1 and September 6, the final day of the season (three reservoirs above this run will be full).

Kaweah River (Class IV+):
High flows between now and mid-June. Med to low flows between mid-June and early July when the river becomes too low to raft (no reservoirs above this run).

North Fork Stanislaus (Class IV+):
Regular flows from now until early June when the river becomes too low for rafting.

Upper Klamath (Class IV+):
Regular flows from now until mid-October (one large reservoir above this run will be full).

Cal-Salmon (Class V):
Med-high flows from now until mid-May. High flows from mid-May to mid-June. Medium flows from mid-June until early July when the river becomes too low to raft (no reservoirs above this run). Road to starting point on river maybe closed for the season due to a large mud slide.

Cherry Creek (Class V+):
Flows are too high until late July. Medium flows from late July until Sept 6, the final day of the season (three reservoirs above this run will be full).

If you have any questions about this information, please feel free to call us. We always enjoy talking about California rivers with people like you. We like rivers and we like people!