The slightly skewed deductive reasoning skills of a raft guide:

It is cold, pounding rain, and there are flood warnings on the radio telling people to stay on higher ground.

Therefore… It is the perfect time to put a small boat on the river and go rafting. (Perhaps a clue as to why that law school idea never worked out for me.)

Actually, the flood warnings didn’t come until after the decision to go had already been made… but they definitely didn’t slow us down one bit.

It was last Tuesday morning in Coloma, and, as mentioned above, it was cold, windy and rainy. Adam and Danny had spent the morning un-loading wood off a truck somewhere, and I was settling in with my laptop and fleece blanket at the guide house for a day of rainy day work.

Then Scott called from the office. He had an idea. The South Fork was somewhere around 10,000 cfs at Chile Bar and rising, he said, so we should go check out the South Fork gorge….in a 12 foot Avon Explorer. (A very small boat meant for low-volume, technical rafting.)

We pondered his reasoning for a moment and then said, “OK!”

An hour later we were gathered at the AO Property in Lotus, in dry tops and suits, blowing up our little raft and wondering if we were crazy. On the way over, Scott and I had heard flood warnings on the radio, advising people to stay on higher ground. We had laughed.

Adam, Danny and Scott had collectively decided for me that I would be 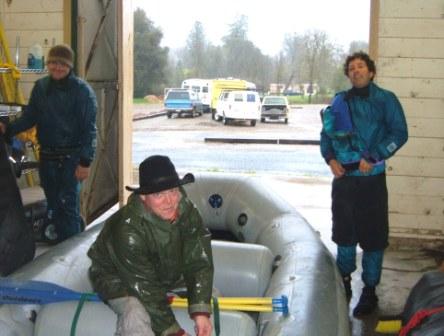 guiding the raft that day, and even though I kept protesting, it didn’t seem like they were about to give me any say in the matter. This only added to my nervousness about the day, because any one of them could probably do a better job.

We put on the water in an eddy filled with swirling debris that had been washed downstream by the rising waters. The current flowing by the eddy was going so fast that the whirlpool fence created by it was a few feet across… and this was a relatively calm section of river.

I set what I thought was a pretty strong angle upstream and called a forward paddle. Adam said “More angle,” and with what seemed to be crystal clear logic I thought to myself, “Well, if I point us directly upstream we won’t go anywhere!” And so, I barely adjusted my angle, and sure enough, when we hit the eddy fence the boat nearly tipped over. (Nothing like giving your paddlers a good reason to trust you right at the beginning of the day.)

So I was off to a good start. The water was the kind of chocolatey (new word) mess that it becomes only during and right after a good storm, with the occasional half a tree floating by and what used to be peaceful bends generating huge holes as the water crashes off its new walls.

It didn’t take us very long to get down to “The Gorge.” It was almost a surprise when we got to it because so many landmarks – Gorilla rock, our tarps and picnic tables at the lunch spot- were completely under water.

Scott gave me a quick run-down of what Fowlers (the first big rapid) should look like at such high flows. (We were estimating that flows in the gorge were probably somewhere between 11 and 12,000 cfs.) He told me that Fowler’s Rock, instead of a wrap rock, would be a really really big hole that I definitely wanted nothing to do with, and that I should start sort of left of center and work towards the right of it.

So that’s what I did….with plen-ty of time to spare….way upstream of Fowler’s Rock….completely forgetting about the house-sized boulder that usually resides in the top-middle part of that rapid that was mysteriously nowhere to be found. My eyes, however, were focused on the left side of that choclatey mass of churning water, at the hole that once was Fowlers.

“Forward!” I yelled. Adam and Danny started paddling. A few strokes later Scott yelled “Stoooppppp!!!” My eyes immediately shifted to the right, and that’s when I first saw it. A very wide, abrupt horizon line that I had begun to steer our boat right towards. “Back paddle!!! Hard back!!” (Any bird, had there been one flying around in such a storm, would have had to laugh at our little boat, zigzagging all over the place above these monstrous holes, looking small and confused.)

Thankfully, Adam, Danny and Scott all gave some really strong paddles and we just barely missed the house rock hole. We were close enough, though, to get a good look at the mess we had almost landed ourselves in. Our little boat would just have been eaten by that thing! The funny thing about it, though, was that our flirt with disaster landed us right in the slower water behind the hydraulic, giving us plenty of time and space to miss Fowler’s. It was the perfect run, by accident. 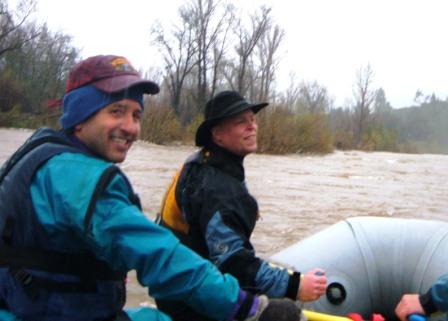 After the adrenaline rush in that rapid, I finally lost a lot of those nerves and started feeling much more comfortable guiding. What I gained, however, was a paranoia of putting us anywhere near what looked like a large hole.

This amounted to what would have been another humorous spectacle for a bird to observe from above, in which I would see a hole or bend up ahead, point our boat away from it, and call a forward paddle…. all the way into the swirly eddies on the other side of the river. We would then spend a few precarious seconds balancing and shifting weight against the violent currents in the eddy fence, spin around a few times, and start the process all over again. (I’m sure those guys were very happy with their decision to have me guide at that time.)

All monster holes did get avoided, however, and the rest of the day was just non-stop huge waves and fast-moving water all the way down to Folsom Reservoir. There was one more ominous moment above lower Haystack Canyon: Just as Scott was telling me that Haystacks would be one of the biggest, harder parts of the run, the rain started pounding down so hard on us that we could barely see. All I could make out was a moving blur of brown taking us further and further downstream. We took a best guess at which line to take around a center hole at the top, which luckily turned out to be the right choice, and paddled through the wind.

Once things slowed down a bit towards the end, we got a chance to look around and appreciate all the waterfalls and side creeks pouring down the canyon walls. The rain created a thin mist over parts of the river, and everything around it was a deep and healthy green. It’s amazing how much a river can change. 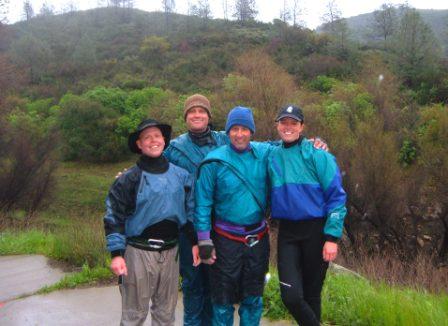 We took out at the Salmon Falls Bridge a short hour and fifteen minutes after putting on in Lotus. Although thankful to be that much closer to a warm shower and further away from any more house-sized holes, I was happy to have been on the river that day. It’s not every day you get the opportunity to guide a tiny paddle boat in the middle of a storm, scare the crap out of your boss a few times, learn a little about high water eddy lines, and almost flip all in one trip. A little bit crazy? Maybe. But definitely a ton of fun.