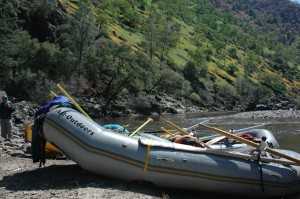 Man.  What a winter.

Ol’ Man Winter seems to have nodded off for much of his tenure this year—thankfully however he got a wee wake-up call at the last-minute and got back to work for at least a little bit at the very end.

As we’ve been reporting for months now, we’ve known all winter that even with the drought the reservoirs above our main rivers have sufficient water to guarantee recreational flows this year.  What the last set of storms did for us was not only help the state overall (which is frankly the most important thing) but also gave us the boost we needed to have short but sweet seasons on some spring rivers like the Kaweah and North Fork American Rivers. It also gave us the boost we needed for the Merced River, which will run into very early June.

Before and After the late Storms: Free-flowing Rivers

Until the last set of storms the snowpack overall in the state was dismal at best.  Agencies tend to divide the state into three regions—north, central, and south, and all had room to improve, shall we say!

The northern part of the state was at 7% of normal; it has now grown to 25%.  This region doesn’t have an affect on our main runs.

Furthest south, in January the snowpack was at 22% and is now at 32%.  This means the Kaweah will have a short but fun season.

Before and After the late Storms: Dam-controlled Rivers (this is the best news part!)

The central part of the state—which has the greatest impact on our main operations—actually fared the best.  In January the numbers were at 18%.  Now we’re at 40%, which gives us all the water we need for regular and reliable summer flows all season long on the South and Middle Forks of the American, and the Tuolumne and Cherry Creek.  And by the way, “regular and reliable” isn’t PR-speak for “lame but runnable.”  It means we’ll have the same water we do pretty much every summer. In other words—the usual great conditions. We aren’t going to have any high water trips or anything, but since those are only for the adrenaline junkies among us anyway, the vast majority of rafters aren’t going to even notice the difference.