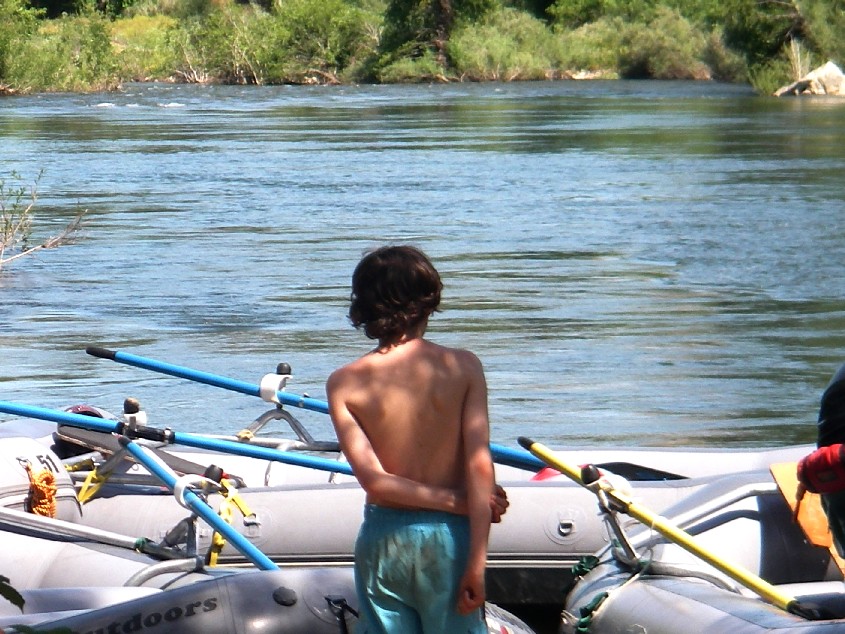 I didn’t have what one might call your “average” group of kids assigned to my boat this last Wednesday morning. But then, no one guiding that day did. The large group of about 50 kids and 15 adults were all joining us from the Stanbridge Academy: a special education school in the Bay Area that has incorporated an All Outdoors rafting trip into their experiential education program for the past 20 years.

High water, low water, rain, or shine, All Outdoors had made sure to work something out for these kids every year. (For the higher flows this year, we had experienced guides taking the kids down in oar-paddle combos.)

Last Wednesday was my second time working the Stanbridge trip. My first time working it I have to admit I was a little bit nervous. I don’t have any experience working with learning disabled children, and guiding a boat is all about understanding how to work with and lead different personalities down the river. But the kids surprised me last year, and I had a great day with them. They were all incredibly excited to be there, and more focused even than some groups of “average” adults. 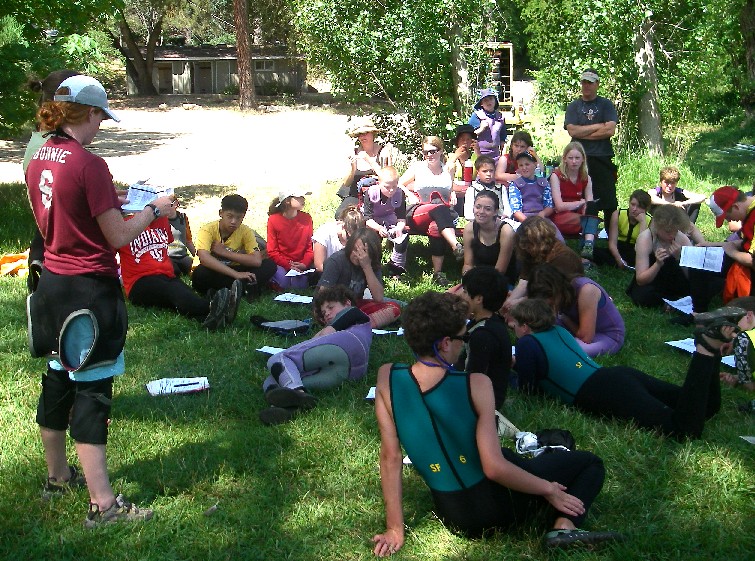 I therefore went in to this year’s trip with much less apprehension, and was looking forward to a really rewarding day. When I first met my crew, however, I thought that perhaps this time would turn out to be a little more challenging. There was the boy who said over and over again how much he hated whitewater and didn’t want to be there, a girl who shyly gave her name in a hushed voice, a younger boy who kept at least half his body out of the boat at all times and had more questions than I’d ever heard, and a hesitant boy who was unsure of himself even just climbing into the boat.

I told the whitewater hater that we had a few hours to change his mind, asked the shy girl to repeat her name for me, told the younger boy that he was going to have to keep his hands on his paddle and body in the boat, and the hesitant boy that he was doing everything just right. The two adult chaperones in the boat with me helped me out by repeating my instructions and telling the kids that they would have to listen to me.

Then I took a deep breath, prepared for a harder day, and set out downstream.

It wasn’t until after lunch that my perspective began to change, and I began to notice small transformations occurring within each of the kids. The first was with the boy who was so averse to rafting. In preparation for some of the harder rapids in the Gorge, I wanted to have each of the kids do a small swim practice; jumping a few feet out from the boat, then swimming back to be pulled back in. 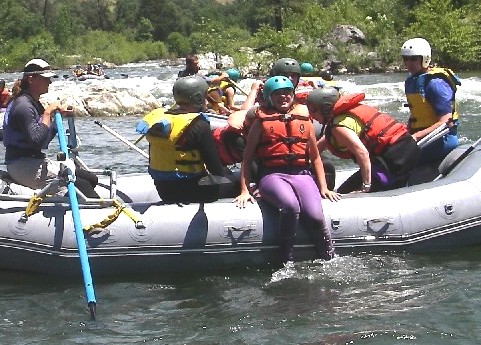 It turns out that water, in fact, is what the boy so hated about the river. He didn’t want anything to do with it, and getting in was out of the question. So I had the other three kids go first. (To my surprise, the quiet girl was the first to jump out of the boat with a big smile on her face. Apparently just the opposite of her friend, she seemed to be in her element in the river.) Finally it was his turn to go. Honestly, I wasn’t sure we could get him to jump in, and I wasn’t about to force the issue. But he finally turned to look at me and said in all seriousness, “I face my fears head on.” Then he jumped. It was incredible. There was no freaking out, no thrashing his arms. He just calmly swam back to the boat and let his classmates pull him back in to the boat. His only complaint was that the water was cold. 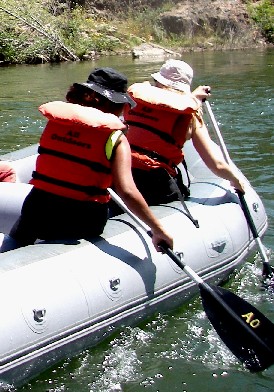 Throughout the rest of the day I saw them all slowly loosen up and let go. There were cheers as we splashed through the waves, and the girl had a smile of just absolute bliss on her face in every rapid. Even the guy who started out hating the river said, “That was fun” after we got through Hospital Bar. The smaller boy who couldn’t keep his hands on his paddle and body all the way in the boat really wanted to sit further towards the front at one point. So I told him that he would have to pay attention, sit forward, and paddle hard for ten minutes. And he did exactly that! I had almost forgotten about our deal when he turned around and asked, “Has it been ten minutes yet?”

It was funny, too, that this particular boy was the one who seemed the least focused and attentive in the morning, because by the end of the day he proved that he had, in fact, been playing close attention. When we got to the lake, he asked if he could row the boat out for us. The oars we use are ten feet long and the frame rigged for an average sized adult. Because he was about eleven years old, had never rowed anything before, and was definitely no taller than five feet (maybe not even four and a half) I thought that he would just fumble around with the boat for a minute, going in circles, and then I’d have to take back over. I was shocked when he climbed into that seat, and with near-perfect form started rowing us towards take-out in a straight line, pulling the boat a surprising distance for someone so small. His ability to imitate like that was just incredible. One of his teachers saw my surprise and said, “He’s like that with all sports… was on black diamonds his first day on skis.” 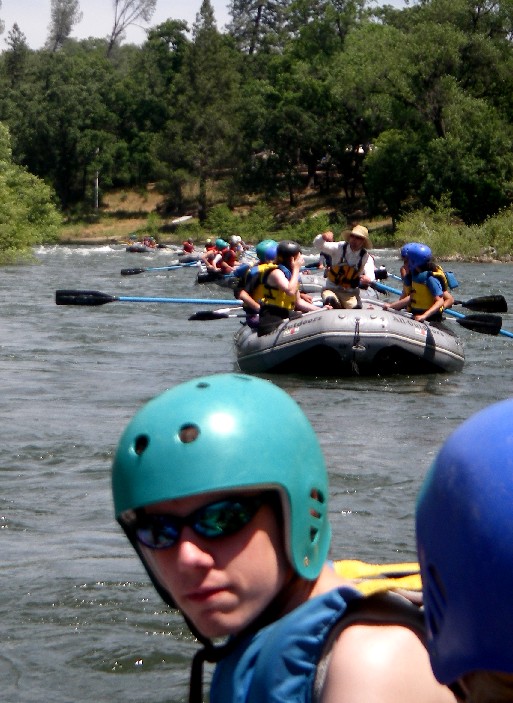 And so they all surprised me that day. Here I was thinking that these kids were going to be such a challenge, and instead they all turned out to challenge themselves that day. At take-out, the boy who started the day telling me how much he hated the rivers and whitewater, helped carry three boats from the lake up to the parking lot. (Much more than anyone is expected to do.) They all told me how much fun the day had been, and how they wished they could just drive up to the top and do it all over again.

And I then surpised myself by thinking, me too. Well, maybe not that evening. I was pretty tired by then. But definitely next year… I understand now why All Outdoors puts so much effort in to making these trips work out every y 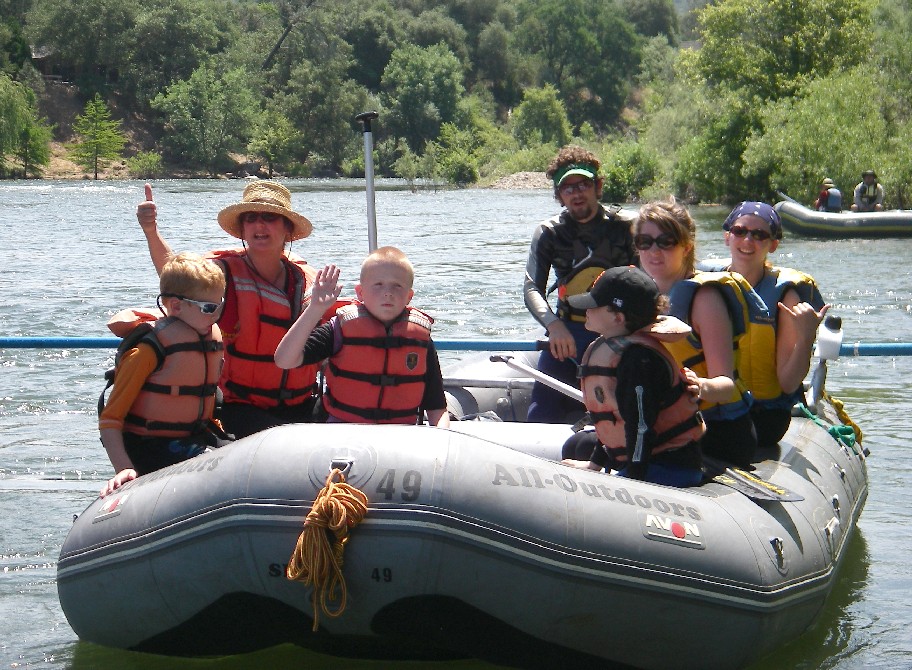 ear. It’s a special group of kids, and absolutely amazing to see how the river can bring out some of their best and most positive attributes. It was such a rewarding thing to be reminded of the power of the outdoors to transform, and to realize that it’s still transforming me.