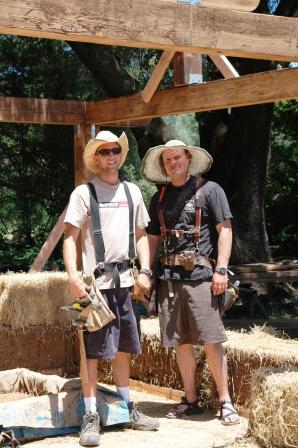 It all started innocently enough, with a few All-Outdoors guides heading off for a fun weekend of food, drink, and good music at a Spearhead concert in Hopland, California. Two years later, the field-like area behind the All Outdoors property in Lotus found itself inundated with recycled wood, straw, some friendly folks from Hopland, lots of mud, and a few confused-looking river guides with muddy feet and hammers. The end result of all this? A “groovy”, eco-friendly, and quite beautiful strawbale building at All-Outdoors’ new South Fork American River put-in. 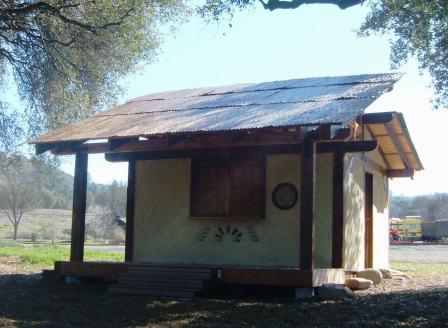 [For some more background information on alternative building and construction at All Outdoors, read Old Barns, Railroad Ties, and Stawbale–Alternative and Recycled Building Efforts at the All Outdoors South Fork Property.]

So how did things go from a Spearhead concert in Hopland to new strawbale building in Lotus? And what is so cool and groovy about strawbale construction anyway?

Well… That concert was actually part of a bigger event called Sol Fest, which is hosted every year by The Solar Living Institute as a celebration and promotion of renewable energy and other sustainable living technologies. The guides that went to that concert took note of how cool and facsinating the Solar Living Center was, and decided that they wanted to go back and learn more about sustainable living. One of those guides, Teresa, then told Scott Armstrong (owner) about the idea, and they worked together to organize a field trip to the Solar Living Center that next summer.

(Just to give you a small idea of what the place is like, the main building was so well-designed in its ability to “capture the varying hourly and seasonal angles of the sun,” that “additional heat and light are nearly unnecessary.” Plus, it’s gardens have what are called “Living Structures”, where plants are coaxed into “various dynamic forms, such as a willow dome, or a pyramid of timber bamboo.”)

It is easy to see why those guides would want to go back for a field trip the next year and learn more! It was on that field trip that Scott came up with the ingenious idea of teaming up with the Solar Living Institute for a Strawbale/Whitewater Rafting workshop. The idea was this: people who wanted to learn how to build a strawbale house who also happened to think whitewater rafting sounded like a fun idea, could sign up for a workshop on AO’s property. They would build for a week, then go whitewater 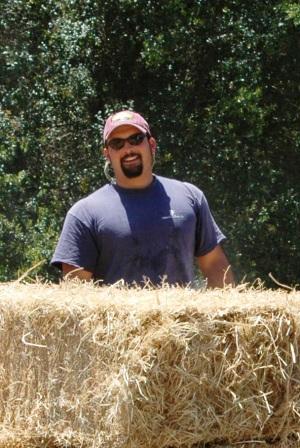 rafting for a few days to celebrate their accomplishment. And in the end, All-Outdoors would have a new check-in center that they could be really proud of.

And so, we are back to that field-like area on the All-Outdoors property, inundated with those friendly folks from Hopland and confused-looking river guides with hammers. Getting to that point actually took quite a bit longer than a week. It started with AO Guide / manager / landscape guru Stewart Hornsby, who designed the structure and gave everyone else a plan to work from.

Next came all those barn demolitions projects I wrote about previously, on which groups of AO guides ventured out with Scott Armstrong on “epic” missions to salvage wood and other materials from old and abandoned structures. Adam Walker then magically turned those old chunks of wood into beautiful beams , and recruited Kyle to help him out with the framing in early June.

Then came the fun part. Guides teamed up with Living Institute instructors and workshop participants. They got their hands dirty, danced around in mud and hay to mix it together, and then plastered the gooey mix all over blocks of rice straw. Although sometimes resembling a child’s dream play date, it actually did matter how much sand there was relative to mud and water, and where exactly they placed those rice straw blocks relative to bamboo braces in the structure. 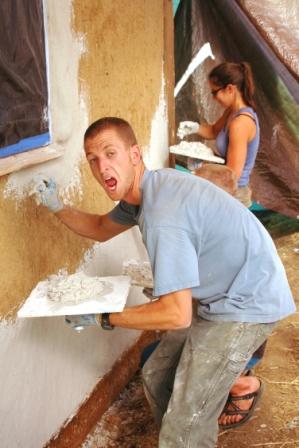 instructors. This fact combined with Adam, Kyle and Stuarts’ talents for design and framing to result in a solid and gorgeous building. I know I’ve said that a few times, but really, this is a much more aesthetically-pleasing structure than any old regular building. Plus, it’s better for the environment!

Which brings me to the second question I asked earlier: What is so cool about strawbale anyway?

There are actually several good things about it. First, all the material used in the building of this check-in center was recycled. The wood and sheet metal came from those old barns, the mud from the AO property itself, and the rice straw from farms. Therefore, no new trees were cutdown. (As for the sheet metal, well I don’t really know where that comes from so can’t really comment on that.) 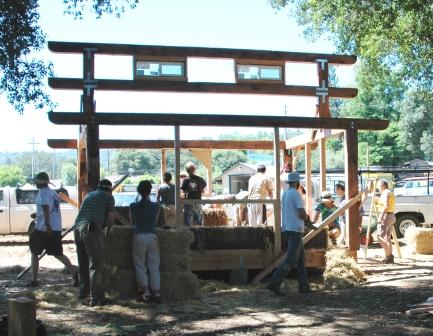 Secondly, it is especially helpful for the environment to recylce rice straw. This is because it otherwise gets disposed of by a process called open burning, which, according to the Solar Living Institute, is “a practice that contributes to the production of carbon dioxide, the so-called ‘green-house gas’ which is the primary cause of global warming.”

Third, strawbale structures are much better insulated than common buildings, meaning that less energy is needed to keep them cool in summer and warm in winter.

And finally, they look good! 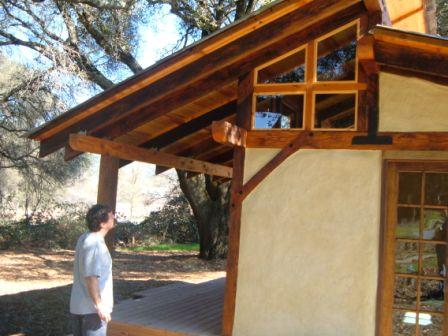 So all in all, a pretty successful and fun project. Everyone learned something, trees were saved, the atmosphere was preserved, and a new useful building was built. Phew! Can’t really beat that.

Plus, All-Outdoors is excited to be able to showcase sustainable living on their very own property, and also maybe have a place to keep all those crazy rafters organized on busy summer mornings.

And then come check out our new strawbale building in Lotus!