A massive oak tree fell down on the property across the street from the AO River Center in the early January storm. It was well over a hundred 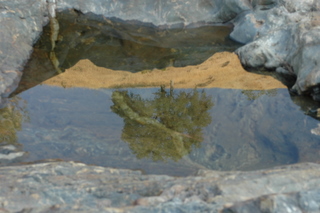 years old—might have been growing here in this valley during the Gold Rush. It shaded the old Lotus hotel before it bit the dust, shaded a tiny cabin and storage sheds, provided a home for hundreds of birds, creepy crawlies, and chattering ADD squirrels. It watched silently as Lotus Road turned from a sleepy country road into an increasingly busy thoroughfare. Buggies and old Ford trucks have changed into SUVs and Subarus with Kayaks strapped to the top.

Walking around the gigantic fallen trunks I noticed a remarkable thing—the tree had grown around a huge rusty iron chain. The links are thick as a finger and the wood had literally absorbed it, had just slowly and patiently grown around the invader, making it part of its body. This chain weaves in and out of the wood as though it were nothing but an errant branch, a strange leaf cluster, a patch of metallic lichen. It struck me how incredibly absorbent nature is, how deeply powerful rocks and trees and water remain in the face of humanity’s relentless transgressions. Iron chain didn’t stop that oak, and neither did the boards nailed to its side for an old tree fort. The tattered ropes tangled in its branches are puny reminders of how little the tree cares about the tiny machinations of man. Of course armed with a chain saw or some gasoline and a match, even I could wipe out that tree in a few murderous moments—but the point is that when we’re fairly matched, the tree is mightier than we are, and I think that deserves some respect. It wasn’t the nails or the chain or the traffic brought that tree down—it was the wind.

Even though the big tree’s body will be slowly cut up and stacked into piles, ready to warm a family’s living room during another winter storm, in a way it had the last word: it squashed every single outbuilding it protected for so long. I don’t think it’s overstating it to suggest that that’s the situation we’re all in on this planet. Comes a point when even the largest creatures are put under too much stress. So think about carpooling more, buying less throw-away junk that you don’t need, conserving energy, water, and what nature we have left. And on your next river trip, take a moment in between rapids to appreciate the river itself, the valley it carved, the wildlife it hosts on its banks and in its waters. If we have the grace to let it happen, all that beauty and all that life will last long after we have moved on.