Tuolumne After A Storm, Day 1

So there we wereâ€¦

All of us gathered at Casa Loma after a night of dinner and drinks in the happening town of Groveland. It was raining outside and the river level in the canyon below us just kept rising and rising. Our spirits were really high- a lot of us hadnâ€™t seen each other all winter long and we were itching to get back out on the river after months of winter captivity.

The prospects of danger and risk hadnâ€™t really entered any of our minds. Instead, we were thinking of adrenaline, excitement, fun. A few of us girls kept talking and laughing in our little corner of the warehouse we sleep in, frustrating those more experienced guides who had the job of getting us down the river the next day. Unlike us, they actually knew what the Tuolumne River looks like at 9000 cfs, and really wanted their rest.

So we finally shut up and fell asleep to the sound of rain pounding against the warehouse windows. The next morning we woke up to beautiful sunshine and talk of possibly higher water than we were expecting. We all shared an exhuberant and nervous energy as we took off in two AO trucks down to put-in. 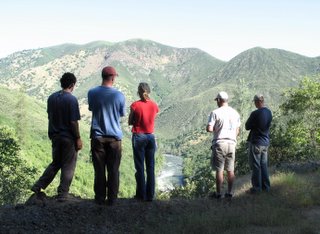 The ride down to put-in is worth a little side-note story. The road down to Merylâ€™s Pool is bad enough riding shotgun in a brand-new F-350. Riding with all the gear in the back of an old vehicle lovingly called â€œGreen Machineâ€ is interesting to say the least. There were about ten of us all hunched up, using life jackets for padding and just doing our best not to hit our heads on any metal railings or each other. (Some even elected to wear their helmets a little early.) Add to this the muddy nature of the ground and you start to get the picture. The guy to my right started making little burping noises half way down, and just to reassure me said â€œDonâ€™t worry Robyn, Iâ€™ll aim right at you.â€

Suffice it to say we were very happy to tumble out the doors when they were finally opened for us. We walked over to the side of the road to check out the river and were greeted with a totally different beast than we all remembered. Gone was a calm deep green pool, perfect for starting the day. Instead, brown churning water sped you with high speed toward Rock Garden around the corner. Also gone were the rocks that gave that rapid its name and reputation. In their place were huge holes and waves. As boats were being blown and frames tied down, a few of us kept walking upstream to check the flow. It was still rising, about 100 cfs every few minutes. And it was already at 9000.

Crews were decided and it turned out that Brian Coleman would have the luxury of taking me, Tessa, Pam, and Brooke in his boat. (I have to say we were a pretty kick-ass crew). I had never sped through the first series of rapids so incredibly fast. It was amazing. I thought Cherry Creek was a tiring run, but this was a whole new level of paddling frenzy.

For those who haven’t yet had the amazing experience of a Tuolumne River Trip, Clavey is the the very heart of the run. It is the climax to which all the first rapids build towards. Although certainly followed by other impressive stretches of whitewater, any guide can attest to a huge breath of relief after finally getting through Clavey. (OK so maybe just those of us who are a little newer at this.) Point still remains that it is a rapid mucho grande. 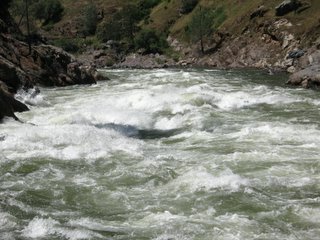 A slight digression: Clavey rapid was formed because the Clavey River dumps in to the Tuolumne at this spot, and during floods of long ago boulders and rocks came tumbling down its channel to their final resting point in the Tuolumne River. These boulders in turn caused the holes and drops of the rapid. The Clavey River in fact usually looks a lot more like what you might call a creek or stream at its confluence with the Tuolumne, and is a great source of beautiful swimming holes and hiking.

Perhaps unnecessary information, but I tell you because on this particular day, rains from the night before had lent the Clavey all the water necessary for it to fully claim it’s “River” title. When we got there, it was adding another three or four thousand cfs into the already swollen waters of the Tuolumne. By that point in the day the Tuolumne had risen even more from the last reading we got at put-in of 9,500. We don’t know for sure, but we think the two rivers combined may have added up to 15,000 cubic feet per second. The effect this had made Clavey the most intimidating and wild rapid I had ever seen, including those I had seen earlier on the Futaleufu in Chile. It was truly impressive. The Clavey River came crashing into the left wall of the Tuolumne canyon, sending huge diagonal waves away from the wall that fed directly into a huge, mushroom-shaped hole. (A usually visible rock called Dinosaur was at that point completely submerged and creating a hydraulic that, when surging, resembled the top cap of a mushroom.)

All of our guides scrambled up the cliffs on river-left to get a better look at Clavey and decide whether or not to run. The rest of us traded theories down below. After what seemed an eternity they returned with the news that we would have to hike out of the canyon. Our day of high-water training had turned into an expedition!! Rather than being bummed I was really excited, and for anyone who ever is forced into the same predicament it’s actually a quite beautiful hike- just watch out for poison oak.

We tied the boats up as high as possible, then started the two-hour trek up and out of the Tuolumne canyon. It was amazing to look back down at the river from so high up and still see whitewater everywhere. Usually, from so far away a river can look decievingly calm. Not the case that day.

In fact I don’t think a single person wasn’t just extremely satisfied and happy with our day. There was an understanding that we had really pushed ourselves and truly explored a wild place in a way we’d never done before. There were no other boats out there with us that day… just us. And it was the beginning of a realization for me that perhaps college water polo wasn’t the last time I’d ever be on a team. We had seen at put-in that the river may get higher and higher during the day, and knew that there was a chance that at some point we’d have to defer to a plan B. But we trusted each other enough to try. And I couldn’t wait to wake up the next morning and try all over again.