AO Blog > AO Weekly: Company News and Entertaining Stories > Where in the World is AO? Marrakesh!

Where in the World is AO? Marrakesh! 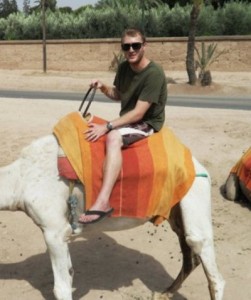 Where in the World is AO?

Still on a bumpy ride, just a lot slower and a lot more dry! My last stop on the voyage this summer has taken me to Morocco. After porting in Casablanca, I took a train to Marrakesh and found myself riding a camel through the desert for 30 minutes! Although it’s more unique than riding a raft down a river, the thrill is a lot less short-lived.

With that being said, it was about 110 degrees in Marrakesh and I would have killed for a little fresh, California water splashing over me! On my camel (she was named LuLu), I rocked my green, Godfather-style AO shirt as a guide led us through obstacles and down a pre-determined course. Okay, so the parallels to rafting are a bit of a reach.

As I mentioned, Morocco was our last port, so I’m currently involved with plenty of rough water. The Atlantic Ocean doesn’t want us to come home and it is doing its best to rock and roll us right back to Africa. But, after a long, amazing summer, I’ll be back home at AO headquarters in no time answering phones and helping you reserve your own trip of a lifetime! And I can promise you’ll get a much bigger adrenaline rush out of riding some of California’s best rapids with AO than trying to keep your balance on LuLu the camel.