AO Blog > Recent Posts > Where in the World is AO? The Open Sea!

Where in the World is AO? The Open Sea! 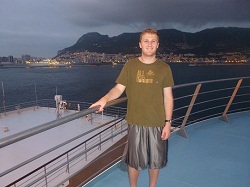 …in the middle of the Atlantic Ocean? I’m taking a break from the phones for a couple months and finishing my second college degree aboard this ship, bound for travel around the Mediterranean for just over six weeks! After eight long days at sea on the MV Explorer, Semester at Sea’s floating college campus, we have finally reached the Strait of Gibraltar. It is our gateway to the port of Barcelona, which will be the first stop of a tour that includes porting at Naples, Rome, Dubrovnik, Athens and Casablanca.

Anyway, I’ve been representing All-Outdoors and proudly wearing my forest green, Godfather-inspired tee from the 7th deck swimming area to my tiny cabin on deck 3 to this observation deck. The waters out here on the Atlantic are choppy enough that it’s physically impossible for any of the 676 students from 290 universities to walk in a straight line for more than a few feet. And I’ve definitely seen some rolling waves out here that rival the Miracle Mile on Cherry Creek.

But hey, at least on the rivers I can see land! I am happy to report that whenever any of my new friends have asked about my job at home, and they hear that I work for All-Outdoors, I’ve gotten awesome feedback. Alex from Colorado, one of the guys I met on move-in day, even went so far as to say that our discussion convinced him to come out to California after the trip and brave the upper T with some of his friends!

I’m having the time of my life so far (we sailed through the very beginning of the Strait earlier; we could see Africa on the starboard side, Europe on the port side!), but amid all these distractions, I’ve still taken a few moments to give AO a well-deserved plug to potential customers from all around the world! Hopefully the weather is still holding up in the Golden State and everyone in the AO family is enjoying a few more high-water runs…stay tuned for an update after four days in Spain!

(If you’ve taken your AO somewhere noteworthy–Bering Straits? Isthmus of Kra?  Send your pic to Malina@aorafting.com and get your moment of notoriety on the AO blog!)