Archive for the 'North Stanislaus' Category 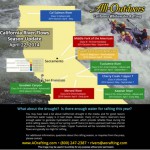 Where in the World is AO? Pura Vida en Costa Rica!

Seems we may have a migratory pattern evolving with our AO staff.  Ever since Pam, former guide and manager of AO’s Merced operation, established a unique beach-side hostel in Playa Uvita, Costa Rica the AO migration has only increased. It’s no coincidence she calls it The Flutterby House. We’ve got AO guides migrating there like […]

Posted in AO Weekly: Company News and Entertaining Stories, California Rivers: Flows, News, Events, From the Middle Fork, From the Tuolumne River, North Stanislaus, Random: Gear, Musings and Poetic Prose, Uncategorized, Where in the World is AO? | No Comments »

Cue Andrea Bocelli and Sarah Brightman singing “Time tooooooooooo Say Goodbyyyyyyyyyyyye…….” because our season on the North Fork of the Stanislaus is over.  The Stan had an incredible run this year, and we had thought that it would be continuing well into August, but the Powers That Be made some changes so presto!  Season over.  […] 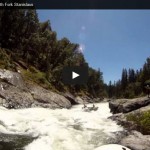 If I had to pick a river that gives me butterflies every time I hear its name… brings back memories of high sides, steep drops, twisty technical turns, and quite the adrenaline rush, it would be the North Fork Stanislaus. Oh what a gem! It was my third time rafting and I was excited for my first Class […]

North Stan Having the Season of its Life!

We just got a bunch of official numbers from the Powers That Be on the North Stanislaus River and let me tell you, this is an unusual season.  We’ve had high water well-past the normal time zone, snowy rafting trips, massive logs across the river to contend with, and now, an end date that is practically unbelievable.  Usually, […]

The end is nigh for North Stan rafting trips this year!  Based on the snowpack in the North Stan watershed and the weather forecast we think there are only two more weekends of raftable flows on this outstanding class IV run.  What I’m sayin’ is, it’s time to quit yer hemmin’ and hawin’ and make […]

Posted in North Stanislaus | No Comments »

Good news for spring rafters!  The strong snowpack from winter 2009, combined with this week’s warming trend, mean water levels are rising on springtime rafting trips.  This might mean free-flowing rivers like the Merced will have slightly shorter seasons, but conditions are wonderful right now.   It’s really an even trade in the end–especially if you’re […]

The North Stanislaus River flows only during a short period in the springtime, usually in late April and May. Unlike other Class IV Sierra runs, the North Stan is a high elevation run (nearly 5000 feet at put-in), lined by redwood trees and filled with enormous granite boulders. The North Stan is one of the […]

The Boat That Wouldn’t Budge

Wrap (n): The less-than-ideal situation in which a boat is held against a rock or boulder in the river for an indeterminant amount of time by the force of the current. When I and seven other guides got to the North Stanislaus this last Sunday morning and hiked down to look at the boat that […]