Pre-Season Sale: Save 25% On Any 2021 California River Trip! Learn More

Archive for the 'MultiMedia' Category

Class IV rafting is reborn this October. Much like the phoenix, which expires and then is reborn in fire, class IV rafting will wear itself out at the end of September as the Middle Fork American River loses rafting flows but then resurges in the middle of October as the Goodwin Canyon opens for a […]

Hospital Bar is a fan favorite, class III rapid on the Lower “Gorge” Section of the South Fork American River. It caps off an awesome day of whitewater, and, as people are quick to notice, it lives up to its name (it doesn’t send you to the hospital, it’s just really fun). So here’s how […]

It’s another exciting day on the Middle Fork American River. You’ve gotten up early to meet us in Forest Hill, CA, a one-horse town that was once considered as a possibility for the state capital. You’re already wet and enjoying yourself…and then there’s this: [vimeo]https://vimeo.com/46385208[/vimeo] Last Chance is a natural rapid, a powerful pour-over of […] 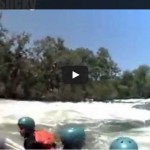 Take a ride on the Tuolumne! New footage…

Thanks to a handy headcam, some high-water lovin’ rafters, and a darn good river guide, we’ve got some great new footage to share with you. This Tuolumne 1-Day trip was captured just a couple weeks ago when it was roaring at 11,500 CFS! This full length version (27 minutes), covers most of the Class IV-IV+ […]

The North Stanislaus River flows only during a short period in the springtime, usually in late April and May. Unlike other Class IV Sierra runs, the North Stan is a high elevation run (nearly 5000 feet at put-in), lined by redwood trees and filled with enormous granite boulders. The North Stan is one of the […]

Last week we launched some new California rafting videos, shot on our river trips last summer. We just added another one, of Cherry Creek, a river one of our guests described as “transcendent and transformative.” Whether you’re an arm-chair adventurer or the real deal, check out our new video, which gives you a virtually-guided tour […]

The 2007 California rafting season has been officially dubbed (by me the AO webmaster)… “The Summer of Multimedia.” To celebrate this soon to be world-renowned era, we just launched several new flash slide shows containing the very best of what Mark Reiner (guide & adventure photographer) shot for AO during the 2005 season. You can […]