It’s a small miracle that I can sit here and type today.  I had thought that after the gauntlet was thrown down, the challenge risen to, the doubters forever silenced, I would be forced to creep off into a dark corner somewhere, down a bottle of Advil, and eat bon bons for a week and […]

Kayaking helpful for rafting? A Case Study on the South Yuba

I’ve heard many kayakers utter the following words: “Kayaking improves your water-reading skills for rafting because you learn to respond to smaller and subtler currents.” Well this winter, I have had a lot of opportunity to test that theory. Here is the conclusion I’ve come to: Kayaking certainly does improve your rafting skills, but even […]

Posted in River Tales (Near Truths and Canyon Nights) | 4 Comments »

Last weekend, ten All Outdoors guides met up in (very far) Northern California for a weekend of whitewater rafting on the Smith River. The Smith is one of the only un-dammed drainages remaining in California, beginning its course high in the Siskiyou Mountains, and flowing strong and steady all the way into the Pacific Ocean […]

Posted in River Tales (Near Truths and Canyon Nights) | 1 Comment »

Some Favorite River and Water Quotations 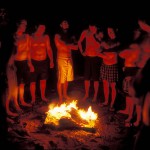 Posted in River Tales (Near Truths and Canyon Nights) | No Comments »

About a month ago, when the water was still extremely high and the weather a little bit wetter, Kevin Elardi decided to spend a weekend exploring the Middle Fork American River Canyon during a time of year in which it’s not often seen by many people. He told me it had been a great weekend, […]

The theme on the Kaweah River these past few weekends has been all about team bonding and brotherhood. With two fraternities doing trips (one from UCLA and one from USC), and then a masters women’s rugby team joining us this last Sunday, we were prepared for some pretty rowdy and crazy days.

Posted in Kaweah River, River Tales (Near Truths and Canyon Nights) | No Comments »

Strange Animals, Lead Feet and Contagious Tents- Our First Weekend Back on the Kaweah

On Friday night, it took hours to get any food or service at our favorite restaurant in town, and strange animals started making noises at three in the morning. Then on Saturday, Brook “Lead Foot” Johnson found herself hiding from a very angry campground manager who was covered in the dust kicked up from her […]

Posted in Kaweah River, River Tales (Near Truths and Canyon Nights) | No Comments »

The Shortest Swim Ever

This last Saturday, Randy and Scott Armstrong organized a fun guides trip down the North Fork of the American River. The point was mainly to have a good time, but also to see what the river behaved like at around 4500 cfs. (A pretty high flow for the North Fork.) Kevin Elardi and I were […]

The slightly skewed deductive reasoning skills of a raft guide: It is cold, pounding rain, and there are flood warnings on the radio telling people to stay on higher ground. Therefore… It is the perfect time to put a small boat on the river and go rafting. (Perhaps a clue as to why that law […]

AO Guides Overnight It in the New River Gorge

Background Info on the New River: California’s New River is a tributary to the better-known Trinity River, flowing out of the majestic Trinity Alps and dropping in to the Trinity at the end of a popularly-boated section called Burnt Ranch Gorge. The New is described in guide books as a Class III/IV run up to […]

Posted in River Tales (Near Truths and Canyon Nights) | 5 Comments »