Posted January 5, 2022 by Gregg Armstrong, Co-Founder
Co-authored by Lenka Bostian
Only a few minutes after we put our first raft into the Stanislaus River and floated off from shore in 1962, we became hooked on whitewater rafting and therefore hooked on rivers. As a result, we also became interested in learning how much water we can expect each spring and summer, so that we can better plan for the rafting season ahead.

All rivers are connected to rain and/or snow. If you want to know what most California rivers will be doing in the spring, summer, and fall each year (The 3 “Seasons” of the California Rafting Season), you need to know what happened in the Sierra Nevada mountains during the “wet season” – from October through May. Ever since that first rafting trip, we have become students of rain and snow totals in the Golden State because what flows in the river comes from higher elevations above.

Accessing Snow and Water Data over the Years

At first, we got our precipitation “facts” from the size and number of puddles in our backyard and how many times they occurred. Later, we started to take note of the snow depth at the cabin our father and his dad built by hand (no electricity!) in the Sierra in the 1940’s. It was a primitive start to river flow forecasting.

As time went on, we became more sophisticated. Over the years we got to know key folks in the California Department of Water Resources in Sacramento on a first name basis. They graciously spent time educating us with real facts and figures and teaching us how to interpret the river flows in the future. With the birth of the internet more information became readily available online and today we are no longer looking at the puddles in our backyard and the snow on the deck of our cabin to estimate how rivers will run in the next rafting season.

Here is a peek at some of the resources we utilize each winter to determine how high and long and well our 10 California rivers will be running in the coming rafting season:

CA Department of Water Resources – Snow Water Equivalent Daily Report
This page is updated daily during the wet months, generally October to May, with snow water equivalent data from a collection of snow survey stations across the state. Snow water equivalent means amount of water stored in the snow.

CA Department of Water Resources – Snow Water Content Chart
The chart shows percent of April 1 average snow water content (water stored in the snow) for the three regions of our state (North, Central, South) with comparisons to other past years. The shape of the bell curve indicates how close or how far the season is from the 50-year average snowpack.

National Weather Service – Regional Snow Analyses, Sierra Nevada
This interactive panel shows a variety of precipitation related data for the Central and Southern region of Sierra Nevada. Static and animated maps going back nearly two decades allow us to review the rates of accumulation and melt of snow in different years, helping us make predictions for the next rafting season.

CA Department of Water Resources – Twitter Feed
During the wet season and springtime we come here for the most up-to-date information related to the official monthly snow surveys and other water related data.

UC Berkeley Central Sierra Snow Lab – Twitter Feed
The university laboratory which is located at nearly 7000 ft elevation posts and shares some great insights and information about the Sierra snowpack.

National Weather Service Sacramento – Twitter Feed
The Sacramento regional station is a good general go-to source for everything weather related year-round. During the wet months it’s a great resource for storm and snowpack information for the Central Sierra region. 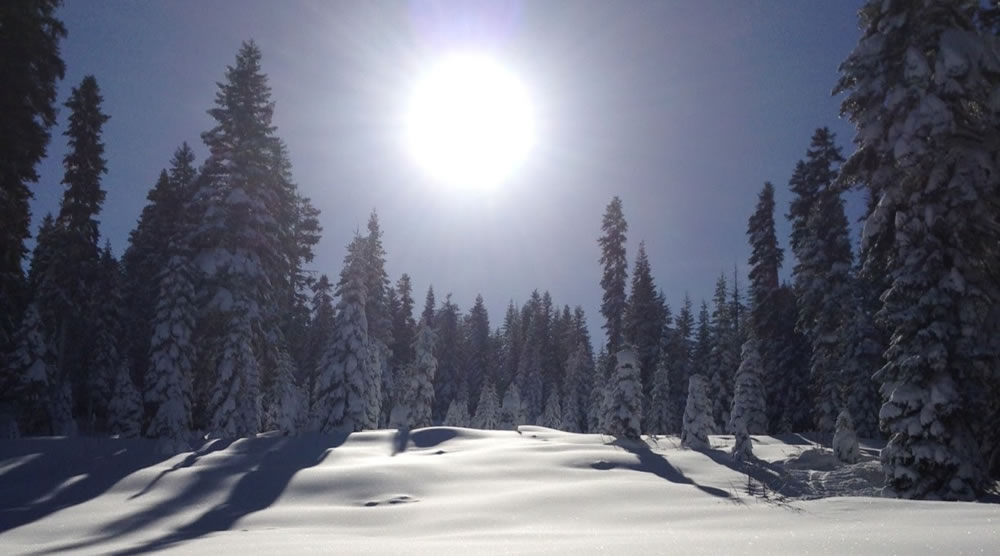 Putting It All Together Into a Flows Forecast Each Year

As mentioned earlier, California’s “wet season” goes from October to May. Once we get to the early spring months, we take the rainfall and snowpack data and compare it with six decades of past rafting seasons. We look for similar years and come up with season predictions for each of the 10 California rivers we run.

A summary of our rafting season predictions is presented each spring on our River Flows page which features real-time river flow graphs and is updated regularly during the rafting season with the latest water flow forecasts.

Our efforts over the years have resulted in forecasts that have been relatively accurate, and have given our company and our guests the ability to plan ahead and enjoy amazing rivers and rafting in California!