Ok, look… we’re a bit miffed. The Men’s Journal published an article claiming to highlight the “The Best Whitewater Rafting Destinations for 2014“, and with the season here underway we were excited to read the list.  But not only did they fail to mention any of our favorite rivers here in California, they even went out of their way to paint a picture of bone-dry rivers with nowhere to go boating in the entire state: 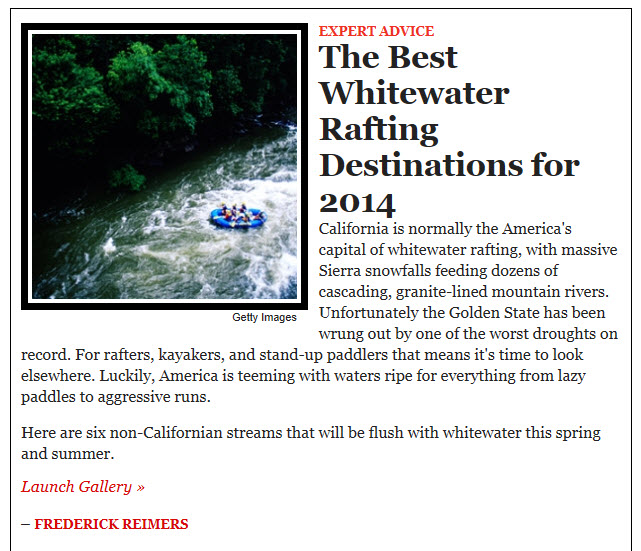 They followed it up with a Tweet that described California as “wrung out” by the drought:

And the author even went so far as to characterize the prospects for the entire season as “poor”:

Wow. That would be really depressing for us California boaters… if it was actually true.

The Men’s Journal is Missing Out. (But You Shouldn’t.)

We can understand why a national publication might be left with the impression that California’s rafting season won’t have much to offer; it’s hard to read anything in the news these days without hearing about the drought. And reliable information is tricky to obtain during a year like this; we’ve had to attend a lot of meetings and make a bunch of phone calls just so we can get the most accurate up to date information we can about the upstream water supply, and new information is still coming in. (As are the storm systems; it’s dumping outside while I write this.)  And to be fair, their article was written a few weeks ago before we had a lot of new information from the utilities that manage upstream releases.  Without the benefit of that knowledge, it’s reasonable to assume that a drought year would leave our boats high and dry.

This is a big perception problem that we have been struggling to overcome in the press, and we’ve been fielding a lot of questions from people inquiring about the season.  If there’s a drought, there must not be enough water for rafting, right?

Thanks to the river gods (and an assortment of upstream utilities, government agencies and late season storms) we have plenty of water this year, all the way through to October.  Yup, October!

Granted, this is a very different year; all winter we were more than a bit worried ourselves.  As a rafting outfitter, our business relies on the Sierra snowpack in the spring, and hydropower water releases in the summer. Everyone in the state has been wringing their hands about the lack of snow we’ve received these past few years; it’s projected to have impacts that ripple out to every corner of the world.  The environmental and economic impacts of the drought are no joke, and we’re not taking the news lightly.

But here’s the thing: we’re not going to let bad press get us down. It’s not going to stop us from getting out on the river, and it only motivates us even more to tell everyone we can to go out and enjoy it with us. We’ve already been on the water running rapids these past few weeks, we’re rafting today, and tomorrow… and we’re going to keep rafting all summer and into the fall, just like we’ve done for the past 50 years.

Here’s a summary of what we know so far about the 2014 whitewater rafting season in California:

Spring Rafting: Tons of Options, and a Big Cherry On Top

This April, May & June we’re rafting on eight different California rivers.  We’re not looking at a high water year, but the snowpack is expected to provide daily rafting on most of our usual spring runs.

There are a few notable exceptions: the North Fork of the American may already be done (it always has a shorter season), and the North Fork of the Stanislaus isn’t expected to have a season. In the meantime, you’ll find our boats floating on rivers as far north as the Cal Salmon, the Merced & Tuolumne outside of Yosemite, and as far south as the Kaweah River (outside of Sequoia National Park), which is expected to run for a few weeks in early May.

And a very, very big bonus: we are getting a big fat Cherry on top of our California sundae: Cherry Creek (or the Upper Tuolumne) will actually have a spring season this year, which almost never happens. Most years the water is too high to run in the spring, but the Cherry Creek season will begin on May 3rd (in less than two short weeks!), and is projected to run all the way through until September 1st.  This might be the longest Creek season we’ve ever seen, and our guides and guests are really looking forward to making the most of it.

Our most popular rivers also happen to have upstream reservoirs that release water to generate hydroelectric power throughout the summer months. We are still waiting to hear on the official word about releases on the Tuolumne in July and August, which we will post here soon, but preliminary estimates are looking really good so far.  This will enable us to offer a wide range of river trip options from family float trips to the most challenging rapids available on commercial rafting trips in the US.

Believe it or not, we will still be rafting after school starts back up.  It’s usually a slower time of year for us, but we still run trips on multiple rivers when the California weather is usually nice and warm in September. Of course, we need water to do that, and we’ll have it: upstream reservoirs will release water throughout the summer at intervals that stretch out the season on the South Fork of the American, and possibly the Middle Fork of the American as well.

Can’t make it in September?  No problem. How about October?   If you’ve ever joined us on a trip during the Goodwin Canyon season, you’ll know what we’re talking about.

To help illustrate all the great options for whitewater rafting this year, we created this map to help our guests figure out when each of our rivers are running (click on the map to see a full size version): 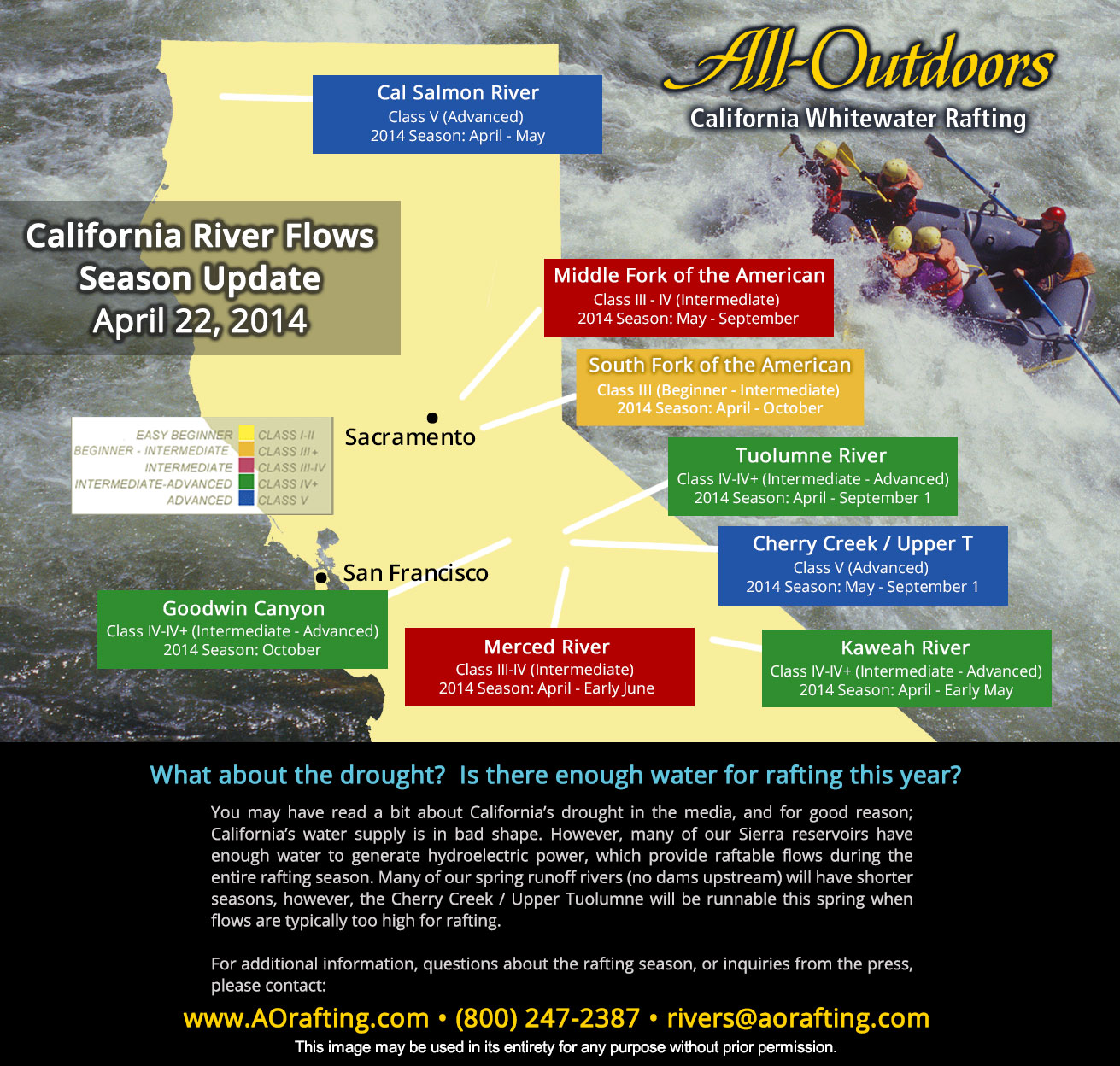 Note: For the full breakdown of each river and its forecasted season, be sure to check our recent post 2014 California River Rafting Season Update [MAP]: Eight Rivers We’re Rafting This Year

It’s Not Just Us That’s Excited: Just Ask the San Francisco Chronicle. (And the Sacramento Bee. And the San Jose Mercury News):

A few other articles have come out in recent weeks that did a great job of outlining the options available for boating this year; grab a cup of coffee and peruse these for more details:

Outdoor writer Tom Stienstra of the San Francisco Chronicle addresses the perception problem (and the awesome, surprising reality) of the impact of the drought on California’s rafting season directly here:

And while we take issue with the clever yet slightly misleading wordplay in the headline, the article does a great job of reviewing the who, what, where how and why of the drought’s impact on the rafting season here:

And as far as the Men’s Journal article is concerned?

Honestly, we’re actually not that upset.  We get it; if we didn’t live here, we might think the same thing after reading the news all winter long while enjoying all those powder days in say… Jackson Hole, Wyoming.  Or Oregon. Or anywhere else in the country (it was a very big winter for just about everyone else.)

So, while we don’t really expect it, we would love to see them revisit this topic in an additional article in the future, to help correct the record.  We all make mistakes, and we definitely agreed with all of the rivers they did include in their article; but we sure wouldn’t mind a bit of equal air time to correct the fact that they erroneously dumped all over California. (And Frederick, if you’re reading this, check your Twitter account for a PM. How about you come out and visit us to see it for yourself?)

Jamie Low started guiding for All-Outdoors in 1990, falling in love with whitewater boating, rivers and a local girl in the Sierra Foothills of California, where he now helps his clients “optimize” their search marketing communications strategies. Connect with Jamie on Twitter, Google+ or LinkedIn