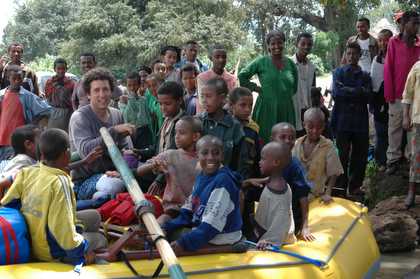 Above: AO owner Scott A on the Nile river, in Ethiopia

For months now, Iâ€™ve been freaking people out by talking about â€œgetting our Ethiopiansâ€ and â€œfinding a place for our Ethiopians to live this summer.â€ â€˜Lest you think Iâ€™m either a) insane b) socially unconscious or c) insane and socially unconscious, let me explain because itâ€™s actually very cool. So first, the background. In 2005, Scott A got this amazing opportunity: he was asked to join an expedition on the Nile riverâ€”the section that flows through . . . you guessed it, Ethiopia. Scott said yes, of course, and jumped on a plane.

The stories Scott tells about the rafting part of the adventure are pretty cool, and, I daresay, make a lot of rafters pretty dang jealous. But for me, and for Scott as well, I think, the best stories are about the people he met on the trip. Time after time, the expedition met generous and kind people who were quick to laugh and lend a hand. Sometimes they were quick to marvel at the crazy equipment and Westerners floating downstream, too!

So it was the people that made the trip one of the best of Scottâ€™s lifeâ€”and this is a life blessed with a stunning array of cool adventures, remember, so this is really saying somethingâ€”and he decided he wanted to give something back. Which leads us to â€œour Ethiopians!â€ We have secured visas for three of the young men Scott met on his trip and they are coming to spend the summer working with All-Outdoors! How cool is that!? A lot of the people that work for AO have done a good amount of travelingâ€”weâ€™ve collectively been all over Europe, Central and South America, Australia and New Zealand, Indonesia, India and random South Pacific Islands. But very few of us have been anywhere in Africa. Iâ€™m sure that the vast majority of our guests have never traveled in Africa either, so this is a fantastic opportunity for cultural exchange and expanding of horizons. Scott says that a lot of the folks he met on his trip asked him if he had any knowledge of their country other than famines and poverty; they were eager to show him that they have a rich and complex culture and history that outshines these two modern calamities. I think this summer we are all going to learn a lot and gain some much-needed perspective.

I look forward to introducing you to Yosef, Dereje, and Elias soon. They are due to arrive any day now!