Record Breaking Flows Are in Store!

The long anticipated 2011 melt is now underway. The cooler weather and storm patterns have finally left California and have been replaced by typical warm temperatures.  All rivers are responding by running high and fast. I flew over the Sierra on Monday and could clearly see the whitewater on the Merced and Tuolumne… two ribbons of white among canyons of green. I also could see that all snow at lower elevations is gone. It is very different at higher elevations. Above 6000 feet it looks like the middle of winter… a thick blanket of snow covers mountain peaks and valleys and every lake was frozen solid. It was an amazing site at any time of the year, but to see it in the middle of June was sobering and exciting at the same time.

The next week will see some of the highest flows in the past five years. Due to the amount of snow at higher elevations, high flows will last for a long time beyond June 25. Once the peak melt is over, long, gradual “tapering high flows” will take over and last through the main part of summer. The deep snow I saw on Monday will take a long time to melt. Also, the fact the peak melt is happening in the last half of June rather than the last half of May makes matters even better…we gain another four weeks on top of what we already gained by having a record breaking snowpack in the Sierra. It is a double whammy situation that is creating an exciting, long, whitewater season for 2011!

Here is our latest Water Content and Flow Prediction… 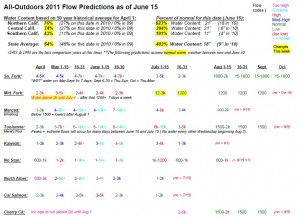 Flows earlier this week were the highest we have seen this year on most rivers and rising. Here’s a link to our River Flows page where you can see the impact of the melt and the flows change in real-time.

Hope to see you on this fantastic whitewater!