AO Blog > Recent Posts > Where All The Wildflowers Grow

Where All The Wildflowers Grow 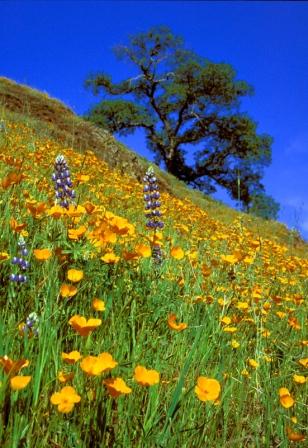 When I was a kid, my German mother asked me once, “Do you think you’ll be an American citizen your whole life or do you think you’ll want to move to Germany or somewhere else?” I looked at her incredulously, and with that exhasperated sigh that only a ten year old can perfect, I replied, “Mom, I’m not an American, I’m a Californian!” Considering that at that time, California in my mind still only consisted of warm weather, sunny beaches, milk shakes and swim team, it’s amusing how strongly I felt about my citizenship.

Included in the many things I had yet to discover about my beloved state was the California Poppy. (At that time I would have been surprised to find out we had a state flower, much less know what it was.) Not wanting to dissappoint that proud little ten-year-old in me, however, whose self-image would apparently be traumatized should she not be a true “Californian”, I’ve since gotten to know my home state much better. I am happy to report that not only can I now identify a poppy, but would even claim to know some of the better places for fellow Californians to go see them.

I didn’t discover California’s wildflowers until I started river guiding and spending more time in the Sierra Nevada foothills. The first time I went rafting on the South Fork American River in late February, I was amazed to see hillsides blanketed in yellow poppies and purple wild irises. The shift from fall’s golden brown to these bright colors and scattered waterfalls seemed almost magical.

California’s foothill river canyons are actually some of the best places to witness this late-winter wildflower phenomenon, but it is a difficult show to catch. As soon as the weather gets warm for a little while in March or early April, those poppies open up, and then only stick around for a month at most. This means you have to be ready to go on a rafting trip on short notice, but boaters are usually good at last minute things anyway.

So what are the best rivers to view them on? Well I can’t claim that I’ve rafted on every canyon in the state where wildflowers grow, but I have seen a few of them and can at least narrow it down a little for the Northern Sierra Nevada foothills. (If anyone reading this knows of a run I don’t mention, feel free to let me know… just don’t say I’m not really a Californian because there’s a little girl in me somewhere that will cry.)

I actually had a bit of beginners luck that February on the South Fork American River, as it has one of the more prolific wildflower populations of any of the spring runs I’ve seen. It’s location well below the harder granite rocks of higher elevation make its hillsides the perfect place for those poppies to just take over. There are literally slopes that are almost completely yellow and purple. And of course there is the added bonus at this time of year that waterfalls are still present in many of the canyon’s crevices. You just have to get out there as soon as the weather warms a little!

If you do decide to raft the South Fork this early, the Upper section is best for wildflowers. (The lower section begins to gorge up, and rock walls replace a lot of those gentle hills.)

The other run worth trying for is on the Consumnes River, a drainage south of the American and North of the Mokulmne. I’ve only seen this river from above when I went rock-climbing there a few springs ago, but have had several people recommend it to me. Beth Rypins, previously a member of the US Women’s Whitewater Rafting Team, advised that the wildflowers are “stunning there in February and March.”

There are a few different places you could put in on the Mokulmne, depending on what kind of whitewater you’re up for. For just a nice easy Class II float through all those stunning wildflowers, you can put on at Latrobe Road, then raft all the way to Highway 16. If you want to start the day out a little more high-paced (Class IV), you can put on at highway 49. Watch out for that first rapid right around the corner though.

Wherever you go, make sure to bring a camera, and some warm gear. Happy wildflower hunting!