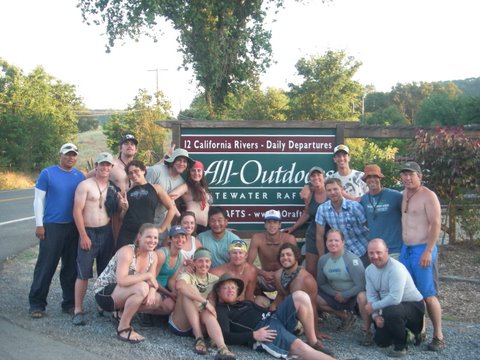 Now that we’re in the middle of the rafting season our early summer rafting guide school seems far far away…….our most promising and motivated graduates have become familiar faces around the office as they continue to work on their training. I asked one of them, new guide Maria, to write a story for our blog about her guide school experience! We’ve also posted a gallery of photos on our ao rafting Facebook page!
AO Rafting Guide School 2009:

It all started out so simple. A description of the main features of whitewater rafting: rapids, holes/reversals, rocks, how angles play a role in missing or hitting key features of the river, etc. All the information was a bit overwhelming and I found myself zoning at times (something I later regretted immensely). The first day was slow going, looking back now after another month of rafting I understand just how slow it was. With a stop for lunch on a commercial trip it usually takes about 4.5 hours to get from the All-Outdoors put in to the Salmon Falls take out. It took us closer to 6 hours to complete the journey.

After rigging all of our equipment (saddle bags for emergency situations, gotts for water, and softies with lunch supplies) we finally set out on the water. Each training boat had a group of eager trainees and one experienced AO training guide. Our itinerary for the day was to raft the lower half of the South Fork of the American River. This is a wonderful section of whitewater for beginning rafters because the first half of the day is full of class I and class II rapids, nothing too intense. Our instructors only guided the first few rapids and then they handed over the guide position to any willing individual. Because no one really new what they were doing, we went from one side of the river to the other; completely missing the current, not understanding how it could help us move in the correct direction and hitting what felt like every rock in the river. It has never taken me so long to raft 5 miles.

At the time I don’t think any of us realized just how long it was taking us. Finally after lunch our instructors thankfully took over guiding again. They easily maneuvered us through the Gorge, which is the class III section of the river. If I had known what the other days would be like I think I would have paid a bit more attention to the angle of the rafts and exactly what the rapids looked like. Little did I know that was the last time I would have the opportunity to watch an experienced guide raft the Gorge. All I could focus on was how huge everything looked and be thankful that I wasn’t the one trying to maneuver us through massive rapids. 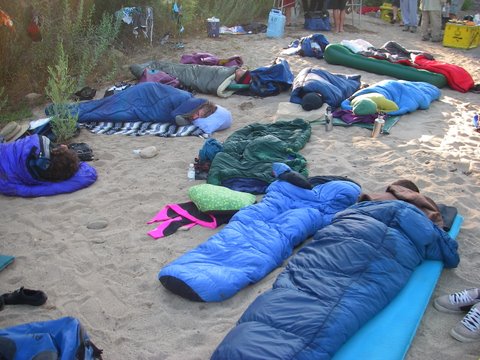 Finally (hours late) we reached the edge of Folsom Lake. At this point I figured the day was nearly over and we were close to returning to camp to get some rest… Oh how wrong that thought turned out to be. Instead of receiving a tow out across the long finger of Folsom Lake, we were lucky enough to paddle. Yes. We paddled out the 1.5 miles to take out. By the time we were done my arms and legs were exhausted. Before the day started I would have said I was in very good shape, but they the end I knew that was a figment of my imagination.

The day did not end there after the paddle out. We still had to put away gear and load the trailers with our boats. When we returned to camp sunburned, exhausted, and starving we still had dinner to prepare and clean up as well as a final check in about the day.

Day two proved to be not quite as strenuous as the first one, although it did start significantly earlier at the tedious hour of 6:00 am. I had the privilege of being on breakfast crew where thankfully my first duty was to make coffee. Luckily for all of us summer mornings involve actual sunlight and it is so much easier to wake up and feel slightly energized with sunlight. The first few morning hours involved knot-tying and administrative essentials, which would help us later in the day. Around 11:00, when it was a bit warmer, we all got our rafting gear together and instead of facing the river in boats for the second time, we paddled them into a pond and practiced our raft-flipping techniques and re-flipping techniques. This turned out to be surprisingly fun and especially entertaining to watch other trainees attempt to climb up large, slippery, 15 foot rafts using nothing but their exhausted arms from the day before. By the time this section ended we had all at least attempted to get on top of a flipped and into a righted boat all on our own. A few very talented individuals succeeded, I on the other hand lost all faith in my upper body strength and was contemplating if I could somehow figure out a way to only use my legs to get into a boat because clearly my arms were not succeeding.

One thing I learned quite quickly was that there are not enough hours in a day for guide school. No matter how you look at it, there was never enough time to learn everything that needed to be learned and get enough sleep to fully function. I soon learned that each day would involve about the same schedule. Waking up between 5:30 and 6:30 am to eat and prepare breakfast and would not end until around 11:00 pm or 12:00 am. Although the days were quite exhausting, they were equally exhilarating and rewarding. Watching people improve, myself included, never got old. 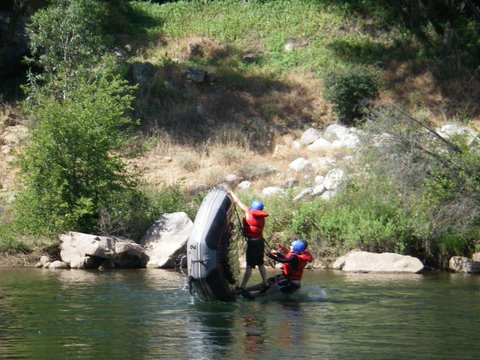 Eventually everyone started to hit fewer rocks and we started to rig our gear in a much quicker manner. This didn’t really mean our days got shorter, but it made them much smoother, which was a relief. I could also swear that the first day we were on the water the rocks were actually bigger and the rapids were actually more intense. As the week progressed everything seemed to make more sense. Ferry angles, boat spacing, and avoiding rocks actually started to become possible. All the little things were quite overwhelming, but the general picture became clearer.

A few days in we had what has to have been one of my favorite moments of guide school. We all wore our wetsuits and helmets and when we got to the gorge we had the opportunity to swim one of the class III rapids: Satan’s Cesspool. It certainly made my heart pound faster than almost any other moment in guide school, but in the end it was totally worth it. The adrenaline rush combined with the freezing cold water was irreplaceable.

The final day of guide school entailed something slightly more challenging and fearful than rafting in boats with a very experienced guide plus other training guides. The last day involved boats of only training guides, which wouldn’t have been so bad if there wasn’t also a boat with one of the owners of the company, the man who would potentially be in charge of our further training and hiring, as well as a few of our guide school instructors. Once we were on the water the nerves eased significantly and by the time we hit the lake, we had all guided and surprised ourselves immensely.

The entire experience was a phenomenal one. Every minute of guide school was surprising and entertaining. The little things got easier, even picking out rocks became doable. In so many ways the training is never ending, but little accomplishments make a huge difference. A few weeks after guide school I finally got myself into the boat on my own – quite possibly my greatest accomplishment to date.