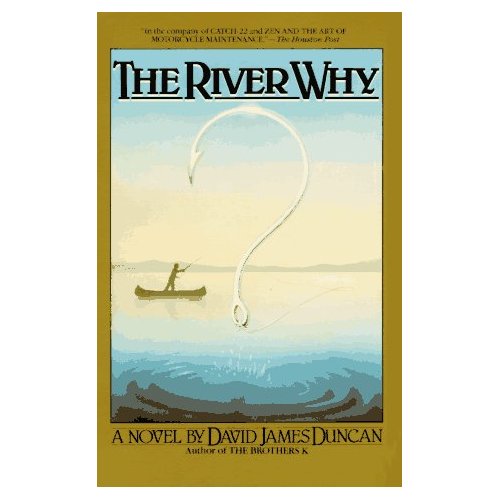 Like any good employee of a whitewater rafting company, when California gets big winter storms I get hopped up thinking about the snowpack piling up in the Sierras. As with farmers, our business depends on ol’ Mother Nature, so good snow means good rafting for us. But frankly, if I’m honest about it, what winter weather really makes me want to do is curl up on the couch with my aging Christmas-stocking candy, some tea, and a good book. And if it’s a book about rivers, all the better, right?

So I’ve been thinking about good river reading and did an informal poll around the office asking people for titles they recommend.

If you need some inspiration to tide you over ’till the California whitewater season begins, check out this sampling of titles. (Typo wonk alert: yes, I know that the titles of books should be italicized or underlined; a glitch in the matrix is preventing me from doing so)

1) The Grand-daddy of river books around here is Cadillac Desert by Mark Reisner. It’s got rough patches, and some even say it is as dry as the former deserts now irrigated by the Colorado River, but it’s a classic whose importance cannot be denied. If you want to understand water politics in the West (and if you’re a rafter you should), this is still the place to start.

2) California Rivers and Streams (Jeff Mount) is another classic for getting the lay of the land for whitewater enthusiasts.

3) If you’re interested in the Middle Fork of the American River, or the ultra-controversial (and now pretty much defunct) proposed Auburn Dam project, Nature Noir: A Park Ranger’s Patrol in the Sierra is for you. This highly entertaining book is a memoir by Ranger Jordan Fischer Smith, who worked in the Middle Fork canyon for 14 years. His book tells the outregeous tale of the proposed dam and its impact on the governance of the canyon, but some of the highlights are Smith’s unforgetable evocations of the denizans of the canyon–miners, sun-bathers, and all manner of riff and raff. Five stars on this one from me!

4) For those interested in the whole of the Sierra Nevada, one of our guides suggests Francis P. Farquar’s book History of the Sierra Nevada. Although described as “dry at times” it gives an excellent background to the natural history and major figures of the region. Plus, how smart will you look reading it? Athletic AND intellectual?? Hello you have it made!

5) Another book I really enjoyed that’s (sort of) related to rivers is the novel The River Why by David James Duncan. I received this book as a gift from an AO friend ages ago, and absolutely loved it. In fact, come to think of it, I lent it to a fellow rafter a few years ago and never got it back. If you’re reading this–bring it by the office! I’d love to have it back.

6) Shooting the Boh: A Woman’s Voyage Down the Wildest River in Borneo, is an adventure memoir suggested by one of our guides. It tells the story of a first descent of South East Asia’s Boh River. Tracy Johnston had no idea what she was getting into when she joined the expedition and had her mind blown by the unexpected heights of adventure, fear, triumph and sheer number of bugs and leeches she encountered on this trip of a lifetime.