AO Blog > Recent Posts > So Many Reasons To Be Thankful

So Many Reasons To Be Thankful

Mark Dubois and George Armstrong at the CRA

As it is the month of Thanksgiving I’d say it’s time to count some of our blessings here at AO. Last month AO’s founding father, George Armstrong, was honored at the C.R.A. Gala. George received the Mark Dubois Award for his leading role in furthering river conservation. In the 60’s George pioneered an outdoor education program at Mount Diablo High School where he was a teacher. It was called Summit Seekers. At the Gala I met Terry, a student of his who became a leader in the program. She says that nothing remotely similar existed at the time in the area and that what George had started was groundbreaking.  He was leading groups of teens into the backwoods, down remote rivers, and up rock cliffs.  His students learned life skills, survival skills, an appreciation for nature and an appreciation for the swift hand of discipline.  Oh yes, if you hang with George’s former students long enough you’ll hear some fun stories. Like the time George took the Summit Seekers on a snow camping trip and found some students drinking alcohol in a tent. You’d think he would have confiscated the liquor, returned to his tent, and poured himself a stiff drink, right? Like any other adult leading teens on a snow camping trip would be tempted to do, right? Wrong. George ended the excursion then and there. They got out of bed, they packed up, they hiked back the to cars, and left for home… at 2 in the morning… in a snow storm. (Yes, I know it sounds crazy and, I think you are getting the point.) I could go on and on, as can George’s students and children. He has created a rich and spirited tradition of adventure in the outdoors coupled with a deep understanding of the need to respect and protect the land we love.  I am fortunate to work for a company with roots as deep and pure as these. It is a rare and blessed thing. 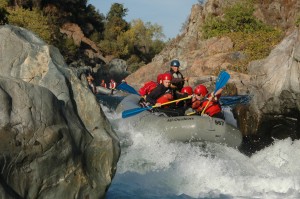 I mean, if it weren’t for George (and our dedicated, hardcore, bad-to-the-bone guests) we wouldn’t have been on  Goodwin Canyon just three weeks ago having a BALL! And, I had better not leave out a big thank you to Mother Nature. We have already had two great storms, the Sierras are snow-capped, AND we have 5-6 days of rain ahead.  I repeat…there are so many reasons to be thankful. Happy Thanksgiving!