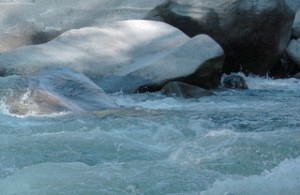 An internal AO rafting document “leaked” (read: cut and pasted from my email….)  to the press indicates that it was one heck of a wild weekend for California rafting!

Check out what owner Gregg A reported back to HQ about how the weekend looked and what we can expect for the rest of the spring:

The Department of Water Resources has confirmed that peaks melt has happened on most runs during the past few days. The water bomb we knew would go off did.

What we will experience from this point forward is a healthy, long drawn out melt that will last about 3 weeks longer than a “normal” year. This is largely due to the cool and wet weather we experienced in April and May which “preserved” the snowpack.     Note that the Kaweah season has been shortened to July 6 (was July 19). If weather gets very hot in June we will need to decrease again to the end of June (Danny will be able to attend his wedding on July 3).   Also note that the Merced has been pulled back to July 26 (was July 30). The end of the North Stan remains June 25 and the North Amer June 20.