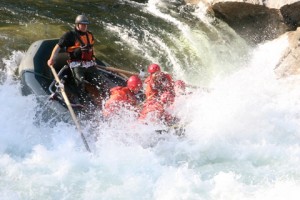 There has been plenty of reminiscing around here lately.  Last year we hit the big 5-0 in terms of years on California rivers–and this summer we realized that we’ve been on the mack-Daddy of the them all, Cherry Creek for 25 years!

Scott had this revelation when he was out rafting Cherry Creek at the begining of the 2013 season.  He was going over the plan for the day with his two guide paddlers, Ryan and Kohner–and what struck him was not their youthful glow so much as the fact that it was their parents who had first explored  Cherry Creek with Scott, his brothers and his Dad back in the 1980’s!  It took two summers of training, complete with lots of flipping, tube-standing, hair-raising, sweet jesus moments and heart-pounding lessons in which way NOT to go before that original crew felt ready to start taking commercial guests.  We’ve been doing it ever since. 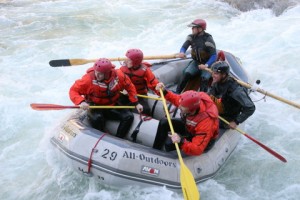 Cherry Creek is widely considered the most challenging commercial river trip in the United States.  To put a little perspective on how ground-breaking those first trips were consider that Satan’s Cesspool, one of the most famous rapids on the South Fork of the American, which is a fun class III, was believed to be too dangerous to run in the 1960’s!  There were people who thought the responsible thing to do was to line the boats through and then continue on down the river.  Today people regularly tube Satan’s, or float through it on inflatable lobsters.  Anyway, fifteen years later we started running Cherry Creek’s back-to-back class V rapids.

So here we are 25 years down the road and Scott is still out there rocking Cherry Creek, and taking literally a new generation of the AO family with him.   Hopefully with clean runs. 🙂

(Above: Adam and Danny. Nailed it!)