New Video: Go Rafting on the South Fork of the American River This Summer! 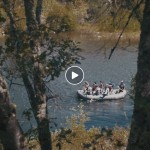 We are very excited to launch our latest river video showcasing the South Fork of the American River! Credits: Breakfast Unicorn Productions is a Bay Area based videography company specializing in promotional and adventure videos. (They also happen to guide for All-Outdoors, and we feel very lucky to have such incredible talent here in the […]

Posted in Featured Posts, For the Homepage, South Fork American | No Comments »

Ten Rivers in California You Need To Visit This Year: The 2016 Spring River Rafting Season Update

If you have been waiting to explore any of our ten California rivers, this is the year to start planning your whitewater rafting trip! The above map shows our current forecast for the coming rafting season; we will post updates both here and on the All-Outdoors Facebook page as new information is released. Updates for […] 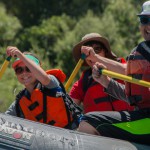 During our most popular sale of the year, you can take advantage of a tremendous 25% discount on any California whitewater rafting trip we offer during the upcoming 2016 season. And with El Nino brewing in the Pacific and forecasts calling for a wet winter, this is shaping up to be the year to go rafting in […] 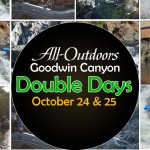 We have great news for all those of you waiting to hear when Goodwin Canyon will be running this year. The government agencies and environmental organizations that manage upstream resources have told us we should have great flows the weekend of October 24 & 25! Please read on for more details: . Now Taking Reservations […] 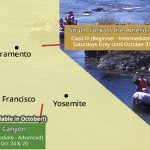 UPDATED: Sunday October 4th, 2015 If you’re considering  one last California adventure on the river with us, you might be surprised to learn that we still have options available for fun whitewater rafting trips until the end of October! Normal Rafting Flows Every Weekend This Fall During September and October, rafting trips are only available on […] 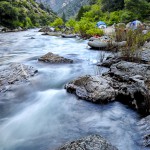 2015 Tuolumne River Water Release Schedule The Tuolumne is a winner for so many reasons. Shall we count them?  Since none of us has all day, let’s stick with some highlights:  the whitewater, for starters, which is an abundant and delightful mix of Class IV-IV+ rapids.  And in between there’s the canyon, a slash of green […]

Posted in Tuolumne River | No Comments » 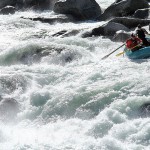 2015 Cherry Creek Water Release Schedule “Best trip ever.” “All the superlatives apply.” “Not for the faint of heart” “TIME OF YOUR LIFE.” That’s not us tooting the Cherry Creek horn–that’s some satisfied rafters sayin’ it best themselves.  And because of water stored in upstream reservoirs, this year you, too, can challenge yourself not just to […] 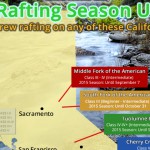 The 2015 whitewater rafting season is underway in California! (Yes, you read that correctly: you just might be shocked to learn that California rivers have enough water for rafting trips into October!) Even during the drought, water stored in upstream reservoirs gets released on a schedule to generate hydropower, provide water for drinking and irrigation–and gives […] 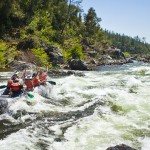 2015 South Fork American Water Release Schedule Gold Rush history, historic ranch land, lively Class III rapids, and easy access to major highways (while still feeling a world away) are some of the reasons the South Fork of the American is one of the most popular rivers on the planet.  But that’s not why we’re […]